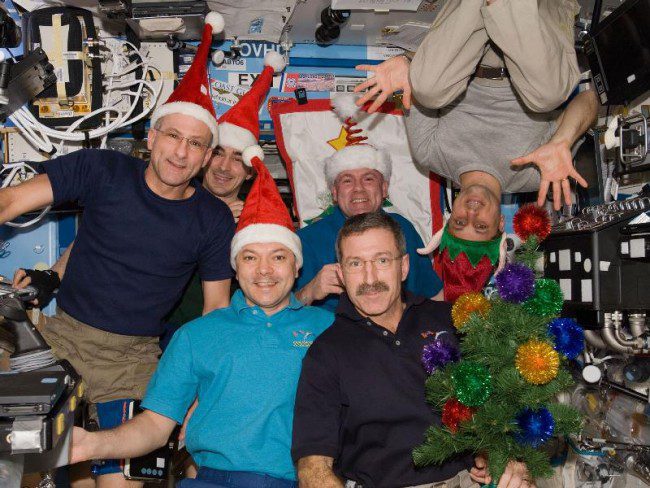 Christmas on the International Space Station (ISS) gives new meaning to shopping early. In their Christmas greeting to the world, Navy Commander Capt. Barry Wilmore and Air Force Col. Terry Virts floated in front of a row of stockings which Wilmore says contain small presents for each other. Though they are away from their families for the holiday season, they are determined to uphold some of their most important and cherished traditions. The view is most assuredly unparalleled and NASA has arranged for the fathers to be in contact with their families on Christmas, even though they are physically separated by hundreds of miles.

Capt. Wilmore gives the bulk of the yearly Merry Christmas greeting from the astronauts currently aboard the ISS, explaining that for Col. Virts and himself, Christmas is a time of worship to remember their Lord and Savior, Jesus Christ. They plan to carry on that tradition from their homes even though they are hundreds of miles aloft in space during the celebrations this year. Col. Virts adds that it will be a “Christmas to remember” with the beautiful sights of space and the holiday lights twinkling in many areas of the Earth and visible from outer space. He urged viewers back home to enjoy the day with their families and joined Wilmore in wishing everyone remaining on the planet a Merry Christmas.

NASA’s Goddard Space Flight Center and Yale University teamed up to make comparison studies of the light output of holiday lights vs. typical output in various cities around the world. Using the Visible Infrared Imaging Radiometer Suite (VIIRS) on the Suomi satellite to record visible and infrared lights they found that major metropolitan areas such as San Jose, Atlanta, Sacramento, Dallas, Phoenix, Los Angeles and Miami, showed up to a 50 percent increase in nighttime illumination between Black Friday and New Year’s Day. The additional light output varies from 20 to 30 percent in heavily populated urban areas to 30 to 50 percent brighter in suburban areas. The increased wattage is visible from space and gives ISS astronauts a brilliant and colorful display. Col. Virts told CBS This Morning that he has no adequate words to describe the breathtaking beauty and brilliant colors that greet them when they look out the window toward Earth during late November and December.

Although both Wilmore and Virts will spend Christmas on the ISS, along with all the other currently assigned astronauts from around the world, and be apart from their children and families, they are grateful that NASA makes it possible for the fathers to see their children and stay connected to what is happening in the lives of their loved ones. Capt. Wilmore explains that they get to do a video link with their families about once a week so he can see his two young daughters and keep up with important milestones such as lost teeth. The same technology can allow them to spend at least some time with their families for Christmas.

However, they also plan to make the most of the holiday celebrations on the space station as well. In the Christmas greeting Wilmore points out that they each have a stocking and small gifts for one another. They even have some turkey and mashed potatoes to allow for Christmas dinner in space. Santa hats and elf shoes bring touch of fun and whimsy to the celebrations to ensure that the astronauts can make the most of their once in a lifetime opportunity to experience Christmas in space.