Ebola Claims the Life of Another Doctor 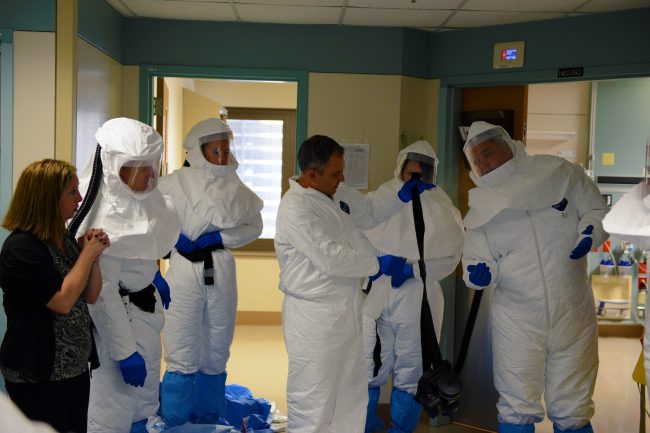 Ebola claims the life of another doctor in Sierra Leone on Saturday. The doctor, Aiah Solomon Konoyeima, would succumb to the virus after being treated at the Hastings Ebola Treatment Center after he began displaying symptoms that started over two weeks ago. Dr. Konoyeima would be the tenth doctor to die in Sierra Leone while trying to fight the highly contagious disease.

So far, 11 Sierra Leone doctors have contacted the virus from patients that they were trying to serve. Of those 11 doctors, only one has yet to survive after catching the virus. According to Chief Medical Officer Kargbo, he thinks that the reason why so many of the doctors are succumbing to the virus is because those doctors attempt to treat their own symptoms rather than seeking medical help immediately.

Sierra Leones medical association that represents the doctors has been fighting to be sure that medical workers are able to receive better treatment so that the doctors will feel safe to continue the fight against the Ebola virus. According to the medical association’s president, Dr. Jeradine George, they met with Sierra Leones President, Ernest Bai Koroma, to double check that they have all the tools and equipment needed in order to handle any future cases of doctors contacting the virus. They hope to see to it that Ebola does not have the chance to claim the life of another doctor.

Konoyeima, the most recent doctor killed by the virus, had tested positive for Ebola a little over two weeks ago. The doctor was kept in a treatment facility that was run by individuals and medical personnel that are from the country of Sierra Leone, rather than in another facility that is operated from individuals from other organizations or other countries. According to officials, the President of Sierra Leone has agreed to open up a new unit that would focus on the safety and treatment of health care workers and doctors.

Many nations are coming together in the fight against the Ebola virus in the Sierra Leone area. The Canadian Armed Forces have sent a group of soldiers to the U.K. for training on how to best protect themselves and others against the Ebola virus before being sent to Sierra Leone to help in the battle against the deadly virus. Volunteers from New Zealand are being prepared to be sent over to the nation to help with operations in a large Ebola treatment center in the country. New Zealand government has also agreed to send 24 natives and over $2 million in funds over to Sierra Leone to help in the fight against the virus. The World Relief Organization and the British Army have also paired up to drop food into the area since many are struggling with their fish markets and food since the Ebola outbreak.

So far, in Sierra Leone alone, there have been over 1,900 deaths resulting from the Ebola virus. Out of all the areas in the nation, Freetown is being hit the hardest with the outbreak. Officials hope to get the outbreak under control before Ebola claims the life of another doctor and even more people.