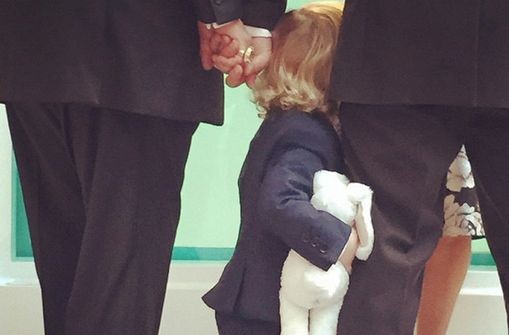 Can you feel the love tonight? Sir Elton John and David Furnish have married. The two men had previously been together in a civil partnership, but on Sunday they were formally wed. In true Elton John fan-friendly style, he announced his pending nuptials and documented the entire occasion on his newly-created Instagram site, using the hashtag “ShareTheLove” so that his thousands of fans on the site could feel a part of his special day.

The wedding ceremony was held on John’s estate in Windsor, Berkshire, located 25 miles from London, England. Multiple celebrities, including singer Ed Sheeran; actor David Walliams; Ozzy and Sharon Osbourne; and David and Victoria Beckham, were in attendance. Elizabeth Hurley posted that she was planning to attend as well. The oldest son of the Beckhams, Brooklyn, posted his congratulations to “Uncle Elton and Uncle David,” saying that the day had been “amazing.”

Brooklyn Beckham also posted the menu for the wedding lunch. Guests feasted on wild mushroom soup, beef ribs, and caramelized onion pie. Dessert was chocolate pudding and ice cream. Champagne  and a wedding cake was also served in celebration of the event.

Photos of the wedding depicting the day’s events, including the exchanging of vows, were posted by the newly married couple. John’s very first Instagram post was his rose-covered wedding invitation. Photos of the event show an Elton John which his fans are not used to seeing, as he is dressed in a black suit with black eyeglasses and a white handkerchief instead of his normally more colorfully dressed self. A wedding ring is seen on his finger. Furnish also wore a black suit and a white shirt and handkerchief.

John and Furnish, who had been together as civil partners since Dec. 21, 2005, and were in fact one of the very first couples to take advantage of civil partnerships becoming legal, have two sons. Zachary, 4, and Elijah, 1, both were present for the marriage of their fathers.

Same-sex marriage was legalized in England and Wales in March of this year after Prime Minister David Cameron pushed to change English law last year in order to allow it. The passage of the law divided his Conservative party, with gay marriage supporters claiming that the creation of civil partnerships for gays instead of allowing them to marry seemed to be a statement that gay relationships were inferior. At the time, John praised Britain, saying that he was “very proud” that the law had been changed.

John also gave a nod to those who have campaigned for decades, through years where being gay in England was difficult and even criminal, for their sacrifices in making same-sex marriage legal. He added that although he and Furnish could have remained civil partners, they married in part in order to celebrate the legislation. John himself faced the pressure of being a homosexual in the early years of his career, when he hid the fact that he was gay and was even wed to a woman.

The music legend has long used his celebrity status to take a stand on issues of gay, lesbian, transgender and bisexual issues. Recently, John publicly criticized Russia for their treatment of homosexuals, and has long been an advocate in the fight against AIDS.