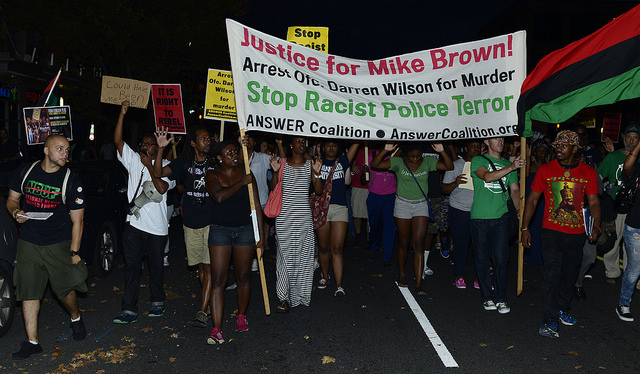 After the fallout from nationwide protests centered around the shooting death of Missouri teen Michael Brown by now former Ferguson police officer Darren Wilson, President Obama and law enforcement agencies across the country have issued a renewed call for comprehensive law enforcement reform. Police departments throughout the country are beginning to reform procedures, including the widespread adoption of body cameras for police officers and an overhaul of the controversial Pentagon 1033 program. This program has facilitated the distribution of military grade equipment to law enforcement agencies across the country.

President Obama took the stage on Monday to echo the sentiments of citizens outraged by the the crisis in Ferguson and encouraged the renewed push for concrete law enforcement policy reform by advocating for the adoption of body cameras to be worn by police officers in law enforcement agencies across the country. President Obama proposed requesting Congress to authorize a $75 million budget to purchase an estimated 50,000 body cameras and recording equipment to be used by law enforcement agencies nationwide. The proposed budget, which would be divided over the next three years, would aid local communities in the purchase of recording equipment by reimbursing the communities half of the total cost spent on such hardware.

Several of the nation’s largest law enforcement agencies have already heeded the renewed calls for law enforcement reform generated in the wake of the Ferguson fallout by adopting body camera pilot programs, such as the New York City Police Department, which announced this fall that it would outfit 65 officers with body cameras. Additionally, the Washington D.C Police Department started a body camera pilot program in September that has reportedly collected tens of thousands of hours of video footage. Washington D.C Police Chief Cathy Lanier has even stated she is considering ending the program ahead of schedule to begin a department wide camera program which would include the entire 4,000 strong police force.

While renewed calls for comprehensive law enforcement reform generated by the fallout from the Ferguson crisis have enjoyed a relatively broad degree of support among local and state law enforcement agencies, there are still those who have raised concerns regarding the potential privacy issues associated with surveillance technology and lack of established policies to regulate the use of such technology. In a statement recently released by the Boston Police Department, Spokesman Lieutenant Michael McCarthy stated that body cameras could potentially compromise the bond of trust between law enforcement officials and citizens. “Our main concern is that over the years, we have established a great amount of trust and cooperation with the community…By injecting a camera, that level of trust can be broken down” McCarthy said.

However, advocates for law enforcement reform assert that body cameras have become necessary to restore trust between the police and the public, citing instances of police misconduct similar to those witnessed in Ferguson to demonstrate a growing degree of mistrust between law enforcement and the public due to unethical policing tactics. The American Civil Liberties Union issued a statement in October which encouraged the Boston Police Department to begin using body cameras due to the results of a report conducted between 2007 and 2010 which indicated that African-American Bostonians were disproportionately observed, interrogated and searched by the police.

The fallout from the crisis in Ferguson has also renewed calls from both citizens and elected officials alike to either reform or repeal the controversial Pentagon 1033 program, which is credited with supplying law enforcement agencies across the country with surplus military grade equipment and ammunition. In addition to the proposal of a congressional body camera budget, President Obama on Monday also expressed desire to reform the 1033 program by announcing the formation of a task force which will provide recommendations within 90 days and stating that he will sign an executive order to make the 1033 program more transparent.

However, outspoken critics of the 1033 program who have advocated for ending it entirely, such as Senator Rand Paul (R-KY), don’t believe that President Obama is doing enough to address the core concern at the heart of the issue, which is the gradual militarization of American police. Opponents of the 1033 program like Paul have cited the initial fallout felt in the Ferguson community from the shooting death of Michael Brown and the militant response of law enforcement to protests as evidence of this growing concern, “We need a law on military surplus material” Paul said. In a statement made to The Daily Beast, Senator Claire McCaskill (D-MO) also suggested that the President’s statement was less significant than actual legislation Congress could be working on. “They didn’t even do anything today” McCaskill said, “They basically put up a timeline to look at what they can do.”

Despite the controversy surrounding the details in the death of Michael Brown and the resulting unrest in Ferguson and throughout the nation, the public and elected officials across the aisle agree that comprehensive law enforcement reform should be a top priority. As the nation continues to grapple with the fallout from the Ferguson crisis, concerned citizens, law enforcement officials and members of the Federal Government have vowed to maintain the renewed call for comprehensive law enforcement reform in an effort to prevent future tragedies.

Sources:
The Washington Post
The Daily Beast
The Boston Globe