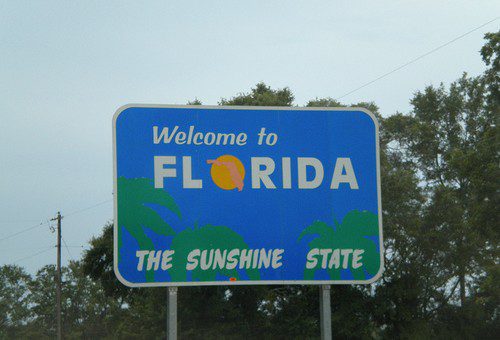 The big orange has bypassed the big apple. Florida, the state that gave us election nail biters over hanging chads and a world of Disney theme parks, has passed New York in population to become the third most populated state.

According to the U.S. Census Bureau, Florida and New York both grew between July 1, 2013, and July 1, 2014. However, Florida grew faster. Now, Florida’s 19.9 million residents (an increase of nearly 300,000 during the period) have surpassed New York’s 19.7 million in population (which only jumped 51,000 during the year). That increase enabled the Sunshine State to become the third largest in America.

All three of the most populated states are known for pleasant weather: California, Texas and now Florida. Those three states (with 38.8, 27.0 and 19.9 million people respectively) represent 27 percent of the U.S. population, and will enjoy a similar weighting in the U.S. House of Representatives in the future. Through in New York and the quartet of states have one-third of American residents.

For decades, Florida was synonymous with retirement developments, the space program, Mickey Mouse as well as the party scenes in South Beach and the Florida Keys. Growth in Florida used to mean people fleeing the cold. It also helps that Florida has no personal income taxes, not to mention countless beaches and water sports.

Now, however, the state has grown considerably and its economy has diversified. Those factors and the still great weather enabled Florida to grow as a force in the American economy as well as emerge as a swing state with considerable political clout.

In spite of its rise in political stature, Florida does not have any of the top 10 cities in the U.S. in terms of population. In fact, its largest city is Jacksonville (number 13 overall) with about 850,000 residents. New York City is still the most populated city by a long shot with approximately 8.4 million residents to the number two city Los Angeles’ 3.9 million. Florida’s second largest city is down in 44th place – Miami – with almost 418,000 people.

It should be noted that the top four most populace states – California, Texas, Florida and New York – are key destinations for immigrants to the U.S. But, surprisingly, the fastest growing U.S. state from 2013 to 2014 was North Dakota. Others experiencing considerable growth included Nevada, Texas, Colorado, Florida and Arizona.

Six states had population losses during the period. They were West Virginia, Illinois, Connecticut, Alaska, New Mexico and Vermont. In general, the losses were small. In fact, none of the six lost more than two-tenths of 1 percent in population.

While the large, comprehensive national census is conducted every 10 years, the U.S. Census Bureau tracks movement annually. The bureau produces annual estimates by state and community as well as demographic info like age and race. While the new data shows Florida’s growth and population passed New York to become the third most populated state, it is the Census held every 10 years that will result in changes in Congress.