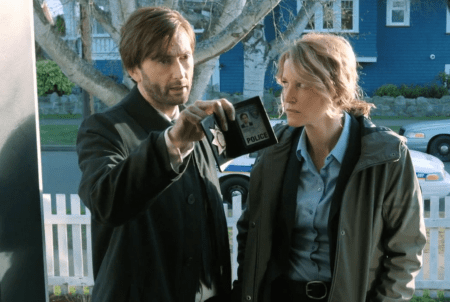 It has been a long time coming, longer than it took for the series that Gracepoint was based upon, but at last the finale has aired and the “real” killer (Suspect everyone? Come on Fox, seriously?) For those who saw the original seaside murder mystery, Broadchurch, either when it aired in the United Kingdom on ITV or later on BBC America, this slightly homogenized and pasteurized American version never really felt as good or as devastating as the shorter series starring, David Tennant, Olivia Colman and Jodie Whittaker. The former Dr. Who played the same role in both shows.

In the fictional English seaside town of Broadchurch, Tennant is a dour Scottish Detective Inspector (DI) and in the equally fictitious town of Gracepoint, he plays an American detective who is not just dour but downright nasty through most of the season. Both shows had something to offer and it was not just David Tennant proving that he can do a couple of different accents. Although it has to be pointed out that his Scottish cop just seemed slightly off and a bit grumpy, his American version of the same character was unpleasant and, for most of the season, downright unlikable.

Perhaps the biggest annoyance about the U.S. version of this moving and tragic little English whodunit, was the Fox marketing campaign which felt like some sort of game show participation ploy. “Suspect everyone,” was the catchphrase and the hashtag, #suspecteveryone. The ITV drama ended up with Detective Miller’s hubby being the culprit. Both shows, despite some puerile assertions that there were major differences between the two versions, and what show these people were watching still mystifies, had only minor differences. These had to do with professions, the U.S. does not have newsagents who employ paperboys and girls, hence the change to make Nick Nolte’s character a canoe rental chap and the odd little “filip” where the local priest was an old boyfriend of the murdered boy’s mother. There were other tiny differences in Gracepoint, but like the finale, none of these were seriously that staggeringly dissimilar.

Den of Geek actually took a moment to point out 13 differences between the two shows, amusingly pointing out that there are no Mr. Whippy ice cream cones with a Cadbury flake, or the 99 as they call it, and the fact that everyone in Gracepoint wears sunglasses. D of G also point out the irritating suspecteveryone.com website that Fox urged fans of the show to visit with their opinion of who killed Danny and the site had a running tally of suspects and their standings in terms of popularity. It may well be this one factor which made the American version so irritating.

Regardless of marketing and publicity strategy, and whether or not Olivia Colman’s DS Miller is better than Anna Gunn’s Detective Miller, it is the ending that requires a close look. It is here that those who are huge fans of the American version and who have not seen the finale, should stop reading. The next bit is a gigantic spoiler if readers did not tune in or have not watched their DVR copy of the season one ending they should turn away now.

In the original, and better, Broadchurch, Joe Miller was the miscreant who topped the 11 year old paperboy that he loved. In Gracepoint it only looks like it was Joe Miller. Another difference between the two shows is also evident here regarding the ages of the kids in both. In the U.K. show, Danny is 11 and in the U.S. one he is 12, it should also be pointed out that Danny’s sister is younger in the English show as well, thereby making her sexual activities way more underage by American standards. Since Mr. and Mrs. America are not too keen upon seeing that sort of thing on telly, even if its only implied, the show’s makers obviously changed it. Just as they made Danny one year older, although not necessarily for the same reasons.

In the Gracepoint finale right up until the confrontation in the hotel room between Ellie and son Tom, which does take place in both shows, Joe Miller is the boogeyman who killed Danny, albeit accidentally, he says, but Gunn’s Detective Miller and Tom conversation ends a little differently than the one between the Millers in Broadchurch. For some unfathomable reason, the show’s writer on this side of the pond opted to have Tom confess that it was he who killed Danny. In Gracepoint, Joe Miller really is a “good man” who confesses to save his own child. Never mind that right up until that point, the audience knows that he was having an inappropriate relationship with the 12 year old lad. So Fox seriously attempted to pull a last minute twist in a show that was pretty much a frame by frame remake of the English tale. This cliched ending, with a father trying to protect his son does not fit nor does it make any real sense in terms of the plot. Apparently Fox felt they needed to do something to make their ending that little bit different in order to justify their misplaced, “suspect everyone,” logo. This American ending feels convoluted, ill advised and cheap, sort of like a melting 99. The kind of ending that makes the viewer shake their head and ask, “Seriously?”