By Chanel van der Woodsen on December 30, 2014No Comment 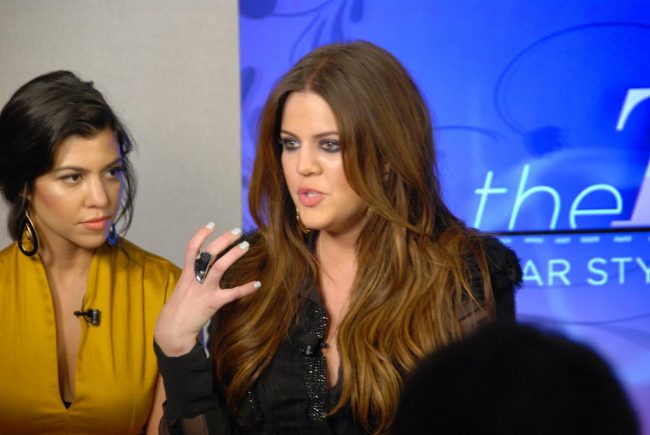 Khloe Kardashian recently exploded on her oldest sister Kourtney during a taping for next week’s episode of Kourtney & Khloe Take The Hamptons, calling her out for what she viewed as the 35-year-old’s excessive need to coddle her alcoholic boyfriend. The blowout began over an incident where the 30-year-old and older sister Kim accidentally left a bottle of booze in the family home, something their sister believes would be far too much temptation for recovering partner Scott Disick and is also extremely disrespectful move on her sisters’ part overall.

A sneak peek for the upcoming episode that was posted on tooFab earlier today, the argument truly begins after the mother of three becomes irritated with the two girls for finding the whole matter to be comical and continuing to laugh hysterically despite her warnings to knock it off and view the situation for how serious it truly was regarding Disick’s addiction as well as his struggle to remain sober despite his tendency to drink when others are in order to be social.

The oldest Kardashian went on to say in one of her personal interview portions of the show that the other Kardashian sisters clearly did not understand that the issue she was describing was not some one-off thing she was choosing to make into a big deal, it was her life and she was absolutely astounded that the pair would laugh in her face regarding the legitimacy of her husband staying alive and winning his battle with sobriety. The situation escalated into a heated argument forthwith, with Khloe finally choosing to cease her laughter and turn her tone into one of anger instead.

The youngest Kardashian puts her sister on blast for what she accused was being unreasonable about a one-time mistake, given that she rarely drinks at home as it is and therefore leaving a bottle out was completely accidental due to lack of habit regarding residential drinking as it was. Kourtney continued to adamantly attempt to explain to her sister that it was in no way about leaving a mess or not cleaning up after herself, but rather the repercussions and consequences of what an act like that could turn into for Disick. Middle sister Kim chose to pipe up at this point, asking Kourtney if she thought that her longtime partner was simply going to decide to take the alcohol and consume it with no question, to which the eldest Kardashian replied that she thought maybe he might. Khloe hit back that if this was the case, Disick obviously needed to go back to treatment and receive some more help for his problems.

The soon-to-be-ex-wife of Lamar Odom went on to try to convince her sister that the situation was fine because her boyfriend had actually ended up helping the other sisters after they had been drinking to stay safe and get into bed, etc, something with Kourtney clearly did not feel was a benefit to the situation. She said that if anything, this made the whole thing worse because he was already struggling to stay sober and then had to take care of two drunk people. Khloe fired up at this comment, throwing back at her sister the fact that she had been forced to take care of Disick multiple times during the family’s stint in Miami, when he got into various heaps of trouble regarding altercations with his alcohol consumption.

The head Kardashian sister told Khloe that she clearly had no respect for her family, something that made the woman extremely upset and enlisted her to recall the fact that she had spent all their current summer in the Hamptons in order to do just that, help her sister’s family get through Disick’s parents’ deaths and keep together as a union. She finished the argument by stating that she was going back home immediately, calling her sister crazy and saying that she in no way wanted to be there anymore.

It remains to be seen whether or not Khloe Kardashian will keep true to her threat of leaving the Hamptons home following her blowout with sister Kourtney over Scott Disick’s drinking struggles. The next episode airs next Sunday at 8/9c on E!