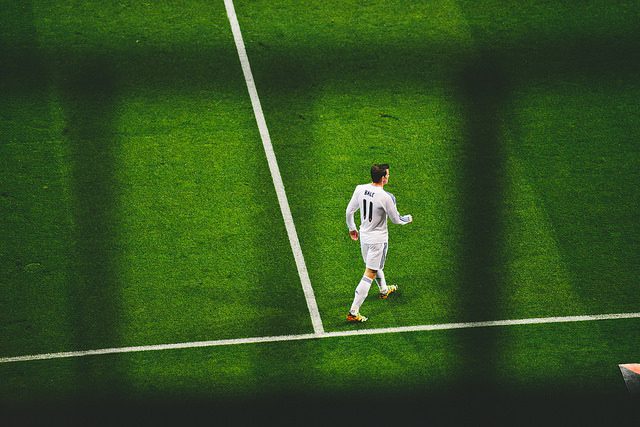 Manchester United fans who have been believing in the circulating rumors of a possible signing of Welshman Gareth Bale have had their bubbles burst by a fairly definitive statement by Florentino Perez, president of Real Madrid.   The rumor was one that took hold of the imaginations of the Old Trafford faithful, but which never held a lot of substance. From the outset, Bale has said that he was happy where he was. In addition, Real has never changed their tune about him not being for sale. This most recent statement merely made the point more adamantly and finally than previous comments, specifically mentioning the lack of any offer from United and the firm resolution not to accept any offer at any price no matter what.

Regardless of the lack of substance, the rumors have persisted for weeks about Bale. Originally, the rumor was for a massive £100+ million contract which was supposed to convince Real to part with him. More recently, the rumors have shifted and linked Bale to David de Gea, and a supposed deal to send the United goalkeeper to Real after the season. While more detailed than the first alleged deal, that was no more likely than the first. With less than a day to go until the transfer window opens, there are many tall tales and wild speculation which has come crashing down. The beginning of the period when real moves can be made has a clearing effect on the transfer market rumor mill.

It is not only United that is having to come down to reality. Chelsea manager Jose Mourinho laid waste recently to one of the more fanciful pieces of prognostication, though one which fans and pundits had latched onto devotedly. Rumors have been rampant that Mourinho was on the verge of signing a monster contract to bring Lionel Messi to Stamford Bridge in January. Given the fact that the buyout clause in his contract would have set the price for such a move at £205 million, the move would have been a cost-prohibitive impossibility in light of the Financial Fair Play regulations. Nonetheless, it took Mourinho coming out and declaring it out of the question for fans to finally back away from the fantasy. These are becoming the days of burst bubbles all around.

With the anticipation ending, and the reality of the transfer window descending, the more spectacular rumors have started to settle. With a month of maneuvering and manipulating to go, however, the rumor mill is simply moving into a different phase. Movements and talks are being monitored very closely, and every handshake and conversation analyzed for hidden meaning or intent. Past relationships and offhand comments will be taken as proof of negotiations and plans. United may not have the  inside line on Bale, and that rumor may be set to rest, but with January beginning it will only be a matter of moments before ten more spring up to replace it. The transfer window is opening, and it is going to be a bumpy ride.