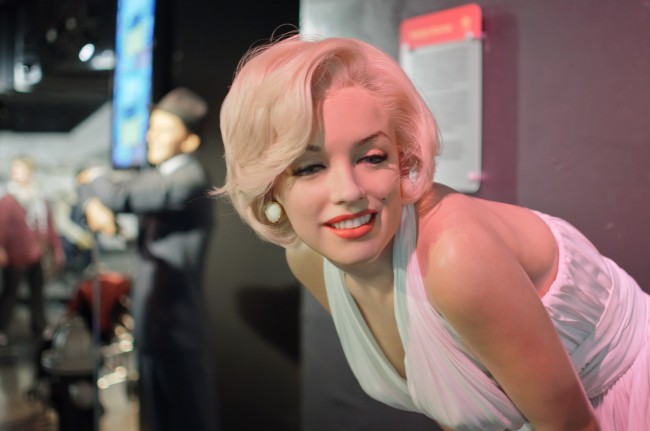 Two of Marilyn Monroe’s love letters have recently been sold for $121,000 during an auction in California. The auctioning of the items that had once belonged to the beautiful blonde bombshell and legendary sex icon was held on December 5 and 6 in Beverly Hills. The two love letters were just a few of the items in the 300 item showcase that was auctioned off to the highest bidders at Julien’s Auctions.

Marilyn had willed the letters, poems, and diary writings to her mentor and friend, Lee Strasberg, before her death more than 6 decades ago. After Strasberg’s death in 1982, his wife found the memorabilia and, most recently decided to put them up for auction. The letters were just a few of the items that were included in the Marilyn Monroe artifact showcase that was dubbed “Marilyn Monroe’s Lost Archives.” Other items that were sold at the auction included written phone messages left for Monroe by a hotel employee, jewelry, photographs, and an old prescription bottle that had belonged to Marilyn from a drug store in Bedford, New York.

Of the two love letters sold that had belonged to Marilyn Monroe, the one that was written from baseball legend Joe DiMaggio to Marilyn would fetch the most money at the auction. The very personal and private letter was sold for a price of $78,125. The letter was handwritten by DiMaggio, Marilyn’s husband at the time, and expressed very loving and thoughtful feelings towards her. In the letter, he talked about his love for her and his worry and concern, stating that he did not like to see her cry and that she looked like she was “ready to collapse.” He also apologized if he caused her any hurt, stating that it was not his intention and that he loved her.

The other letter that was sold at the auction was a letter from the icon to her last husband, playwright Arthur Miller. This letter would be sold to the highest bidder at the auction for $43,750. Another item that was auctioned off was Marilyn’s legendary black coat that she was repeatedly seen wearing, especially between the years of 1956 to 1959. The coat was originally sold with her estate many years ago. It has yet to be told how much money the coat was auctioned off for, but it was expected to bring in anywhere between $80,000 and $120,000.

Marilyn Monroe was born on June 1, 1926 in Los Angeles. Monroe’s mother was unable to care for her as a young child due to her unstable mental health. This would land Marilyn in and out of foster homes and orphanages for most of her younger and teen years. At the age of 16, she married her first husband, Jimmy Dougherty to escape a life inside the system. A few years later, Monroe would become a model and began focusing more on her career, causing her marriage with Dougherty to fail.

The same year she divorced her first husband, 1946, Monroe signed her first movie contract. Within a decade and a half, her acting career would soar as she was honored with a Golden Globe Award. Audiences loved the blond bombshell and her career seemed to be at a peak; however, within a few short years, the actress’s personal life and career would be in jeopardy when she was fired from a major film role due to her absenteeism on the set. Monroe claimed that she was missing work due to an illness but this fact was never confirmed. The two final films that Monroe starred in would turn out to be major letdowns.

Monroe had a series of failed marriages besides her first husband Dougherty, including DiMaggio in 1954, which only lasted nine months. She also had a 1956 wedding in which she exchanged vowels with Arthur Miller but the bliss would last only five short years. Monroe would die on Aug. 5, 1962 in her bed at her L.A. home. Her death was ruled a suicide due to an empty bottle of sleeping pills that was found near her. Although there is some talk that Monroe’s death may have been a murder, these accusations have never been confirmed.

For the new owners of the letters, the Marilyn Monroe love letters that were sold at the auction are more than likely priceless. For those who had the chance to know the sex symbol and legendary icon, the actress was most likely more than just a pretty face, she was a woman who overcame many hardships, including, claims of sexual abuse, pain from psychotherapy, an upbringing by strangers in foster care, and several failed marriages. Sadly, a woman with so much strength would take her life at the young age of 36.