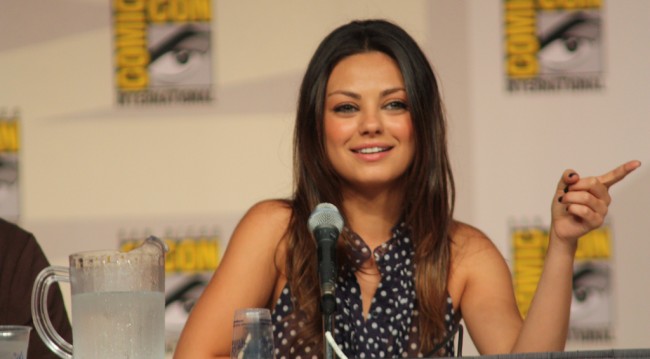 Mila Kunis and Ashton Kutcher have sparked rumors that they have married in secret. They were spotted at a basketball game with the new mother sporting a small wedding band with her engagement ring.

The couple is notoriously private, and so far nobody has confirmed or denied the rumors. However, there are talks of a wedding still being in the works.

The rumors come just months after the birth of their first child. Baby girl Wyatt was born on October 1, and Kunis wore a gold W necklace presumably for her. Kunis certainly looked healthy and it seems like she is getting her post-baby figure back. She was extremely active throughout her pregnancy, which may have helped keep the weight gain to a minimum and will help tone her figure now.

Many rumors started flying around in February when the actress was spotted wearing an engagement ring. Just a month later, rumors then started that they were expecting their first child together. They eventually confirmed both, but have remained quiet about plans and other information. They prefer their privacy, despite Kutcher having a very strong social media presence.

According to a source close to the couple, it seems that Kunis and Kutcher have not married in secret. E! Online reports that the two are still planning their big day. They have just had a lot of other stuff going on in their life, mainly with the new baby in the house. It has meant plans have been placed on hold for the time being.

Kutcher was not wearing a ring on his wedding finger to indicate that they have finally tied the knot. He did wear a wedding band while married to Demi Moore, suggesting that he will during his second marriage.

It is possible that the 31-year-old actress is simply wearing a different type of band. It looks very similar to an eternity ring, which is traditionally given during important milestones like the birth of a first child. As that has already happened, Kutcher may have bought the ring to celebrate the event.

Rumors have not been helped with a previous interview that Kunis gave with W magazine. She mentioned that her wedding would be extremely private and in secret. She even admitted that she never wanted to marry in the past, and when she was 12 told her parents that it would never happen. However, she found someone she loves—as she calls him “the love of her life.” Things change when that happens.

The two certainly appeared as newlyweds while at the Los Angeles Lakers game. They were even caught on the Kiss Cam, and happily went along with things, while they enjoyed the game and each other’s companies. It could have also just been an unusual night away from their daughter.

New York Daily News reports that the couple’s reps have not yet confirmed anything. It is certainly possible that Kunis and Kutcher did marry in secret, and have decided to keep it all quiet for the time being while they enjoy each other’s company.