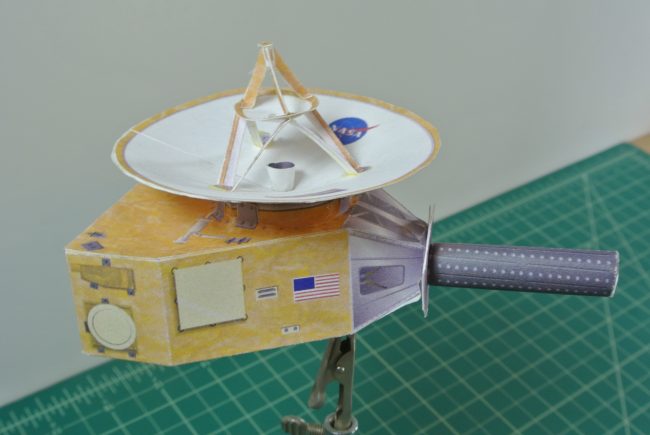 In the afternoon of Saturday, December 6, 2014, at 12 noon Pacific Standard time, the spacecraft New Horizons started the process that would wake itself from its imposed nine-year hibernation as it prepares to expand our knowledge of the most outer planet in our solar system. After an hour and a half, the spacecraft beamed a radio signal to our home planet that it had finished turning itself back on, this time for the final time. Although two-thirds of New Horizons time was spent in hibernation, a few instruments were left on in order to collect data about dust particles and solar winds as the spacecraft moved through space. A beacon had also been attached to the New Horizons, giving scientists back on Earth access to the spacecraft’s movements as it whisked through the dark emptiness.

Although the New Horizons spacecraft had taken only an hour and a half to turn itself on, and had relayed the information right away back to Earth, because of the distance of the spacecraft from Earth, 2.9 billion miles from our home planet, it took the signal four hours and 26 minutes to reach the Canberra, Australia, Deep Space Network run by NASA. The signal had been travelling at the speed of light, to put the distance into perspective. Operators of the New Horizons mission confirmed at 6:53 p.m. Pacific Standard Time that the spacecraft was in what they called “active mode.” Over the past nine years, scientists had woken up the spacecraft twice a year to check that its instruments and maneuvering were working, to ensure that the spacecraft would be able to fly around Pluto. However, this wake up was special, as it marked the last time that New Horizons would need to be put back in to hibernation as the spacecraft prepares to expand our knowledge of Pluto.

January 15, 2015 marks the day that New Horizons will start to observe Pluto. Right now, the spacecraft sits 162 million miles away from Pluto, and at its closest pass of the largely unknown planet will fly by at only 7,700 miles from the surface of Pluto. This historic event will take place in July of 2015. Scientists are hoping to get some clear, precise information from New Horizons about little known Pluto. Since its discovery in 1930, very little information about the dwarf planet has become known. During the 1990’s, astronomers began to realize that Pluto was not a lone planet in a distant orbit, but was rather part of a community of over 1,000 other bodies of objects making up what they call the Kuiper Belt. This made the classification of Pluto as a planet unclear, which astronomers are hoping to clear up with the expanding of our knowledge of the planet with the New Horizons spacecraft as it prepares itself for the mission ahead.

Since no one actually knows what Pluto will look like, scientists, astronomers and those who love the exploration of space will be excited to view the pictures that New Horizons will be sending back to Earth. As well as taking pictures of the planet, the spacecraft will also be using other various instruments to map the planets topography, study the chemical makeup of the planet, as well as look for rings among other studies. The pictures that New Horizons will be sending back as the spacecraft prepares to expand our knowledge of Pluto will be much higher resolution than those taken with the Hubble Telescope. Also, NASA announced more targets it hopes to use New Horizons to inspect after it passes Pluto and enters the rest of the Kuiper belt. Even after the work with Pluto is finished, New Horizons will still be used to explore other unknowns in our solar system.