Robots Threaten to Replace Humans in the Workforce 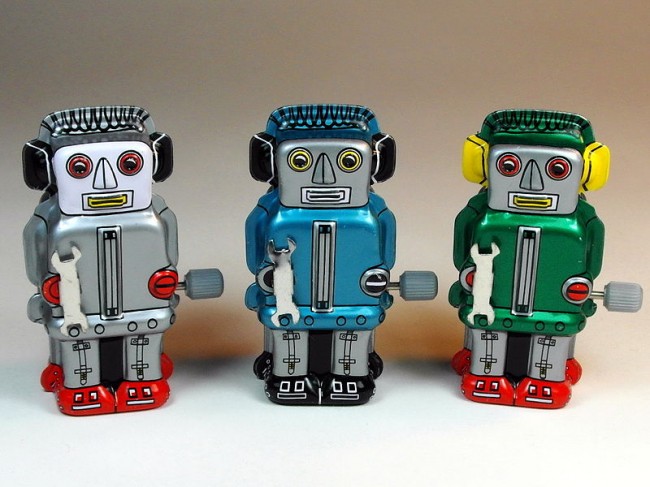 The popularity of robots seem to be on the rise these days. As technology evolves, the precision of these automatic mechanical devices was inevitable. However, there is a growing concern that robots threaten to replace humans in the workforce. The U.S. military has been utilizing this technology for quite some time now. With the invention of drones and other automated military weapons, it was only a matter of time before robots began to move into the public sector. Even the White House will be using more modern technology this holiday season with the use of digital holiday cards and dog-bots which are robot versions of the first family’s two dogs.

Since Cyber Monday has become the busiest day of the year for many companies, the need for a more efficient shipping process is crucial for retailers. In order to remain competitive, Amazon has enlisted a fleet of robots called Kiva and Robo-Stow to manage their ever growing shipping demands. The machines are said to work alongside their human counter-parts; making it easier for workers to place orders.  However, there is still much debate among economists as to whether or not the technology will eventually replace workers.

On December 14, 2014 the National Museum of Mathematics in Manhattan will unveil a new exhibit called “Robotic Swarm.” A small group of mathematicians, designers and engineers are responsible for putting together this exhibit that will be open to the public. Viewers of the exhibit will meet and interact with a dozen robots that resemble horseshoe crabs. These small glowing androids are programmed to follow or retract from a person. They follow simple commands that create fun and interesting interaction through motion control and positioning systems.

As robots continue to take center stage, there are many who are concerned with the implications this will have on the world in general. The question of whether robots threaten to replace humans in the workforce is being asked more often as the technology grows. That discomfort was increased by a study from Oxford University that suggests that half of today’s jobs could be automated away from human workers in the next two decades. Reports of technology such as automated butlers, delivery robots and burger flippers are a threat to low wage earners. However, eventually the technology could grow to effect middle class workers as well as career professionals. After all, who’s to say that a robot could not eventually perform heart surgery without the need of an actual surgeon?

It is impossible to deny the fascination most people have with robots. It is also easy to see how they could make many of the duties in people’s day to day life much more efficient; saving money and time for businesses and individuals alike. As the new age of technology unfolds, it will inevitably create change in how humans work and interact in life, but does this really mean that robots threaten to replace humans in the workforce?  It is apparent that the need for more innovative education is evolving in order to keep up with the world at large.

If human beings are to prevent being replaced by robots, better education of the American youth will need to play a key role in the decades to come. Programs that are geared towards engineering and technology would help, such as in Louisiana where a Girl Scout group created a LEGO robot-making team who will design and program a LEGO Robot, or the growing number of schools around the country that are bringing robots into the classrooms for students to learn. Technology based education must become the focus if humans are going to remain viable in the workforce.