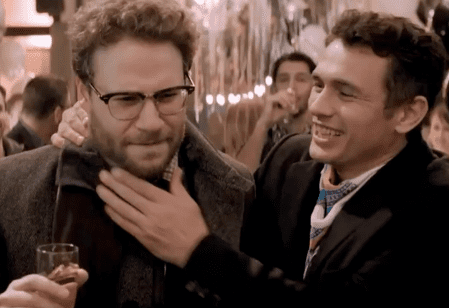 The Sony hack has disrupted the apple cart and destroyed the status quo of not only Hollywood, but every large cinema distribution chain in America, Variety reports that Sony Pictures have cancelled The Interview after enforced Internet terrorist censorship from North Korea. It should be pointed out that Kim Jong-un and the North Korean government have steadfastly denied that they are responsible for the Sony corporation hack or the threats of 9/11 type death and destruction if the film aired on Christmas Day, 2014.

Large cinema chains like AMC, Regal, Cinemark, et al began dropping out like a row of cascading dominoes as the Internet terrorists made empty threats against audiences who would dare to watch this comedy from Seth Rogen and James Franco. Regal, in a prepared statement, claimed their decision was based upon the “wavering” support of the film that Sony has demonstrated for The Interview since the company was hacked by the cyber terrorist group Guardian’s of Peace GOP.

After the Sony hack, this threat to perform “9/11” type of terrorism on any theatre who shows The Interview has caused the company to cancel the premiere of the film with what is assumed to be North Korean censorship. Certain sources in Sony have said the company is thinking about streaming the film or video on demand in an attempt to safely distribute the movie so the studios can get back some of the $42 million production costs for the film.

Seth Rogen has gone on record to say, about the hack, that media have been very irresponsible in printing or repeating the emails and private details leaked from the entertainment giant. Rogen has also stated that he never intended the film to be controversial, it was just an idea that struck him as being funny. It is, after all, a comedy from the team who brought the world Pineapple Express and This is the End but regardless of just who the GOP really is, someone dislikes the film and is demanding it be withdrawn from the market. They have also, temporarily at least, won and gotten the film taken out of theatres.

Bruce Nash from TheNumbers says that since Christmas is one of the busiest times of the year for families to attend the cinema, the threat of violence intimated behind the message, is disturbing and will make families reluctant to go to the cinema. This alleged North Korean censorship which got The Sony film The Interview cancelled, by a company still reeling from a cyber hack attack, is something that can be seen as a landmark event. For the first time in history, a terrorist group have affected the entertainment industry and forced a major studio to pull a film from distribution because of a threat of violence. Sad days indeed for American cinema and freedom of speech.

One Response to "Sony Hack: The Interview Cancelled After Enforced North Korean Censorship"