The Homesman: Tommy Lee Jones in Another Offbeat Western (Review/Trailer) 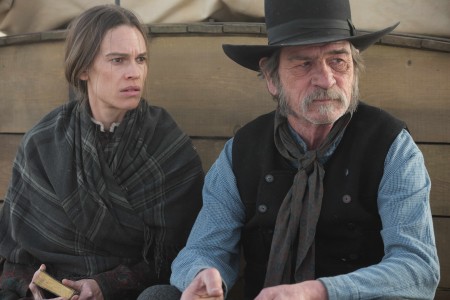 The Homesman, written and directed by Hollywood A Lister Tommy Lee Jones, is another offbeat western by the man who brought the world The Three Burials of Melquiades Estrada, although that was a modern day western and his most recent offering is actually a period piece. Set back in the days of sod houses and farmers trying to survive the harsh Nebraska winter on the plains, the film is a western mainly due to its locale and time. Jones directs the feature and co-wrote the screenplay with Kieran Fitzgerald and Wesley A. Oliver based on the book written by The Shootist author Glendon Swarthout.

In this part of the old west the audience is taken away from the world of the cattle barons, cowboys, gun battles, wagon trains and indian raids. The film focusses upon the “sodbusters” the small holdings of the farmer, although one unseen character may have been branching out into that most despised character of the frontier, the sheepherder. Three homesteaders are struck by a combination of bad weather, disease and rotten luck. Animals and babies die at an alarming rate and the women are treated more like chattel than partners. It is no wonder then that the three women lose their minds.

This picture of early America is grim, bitter and cold. The protagonists are as stark as their surroundings and Mary Bee Cuddy is an interesting woman who has a strong will. Played by Hilary Swank, this lone frontier woman is well into old maid territory, aged 34 and still single, the hard worker and music lover is “plain as a bucket,” and desperate to be wed. At the start of the film, Cuddy invites her neighbor from the spread next door to a meal of fried chicken with peach pie for dessert, after the meal Mary suggests that they should get married. Her guest responds with forceful regrets, he says that not only is she plain, but that Mary is too bossy, and quickly leaves.

Later, at a church meeting, the small congregation is attempting to get one of three men to take the women, their wives, back east since they have lost their minds. Mary volunteers to stand in for Vester, played by William Fichtner (The Dark Knight, Contact) who refuses to even think about making the trip. The spinster draws the deciding bead and heads out to collect the women. On the way she comes across George Briggs (Tommy Lee Jones) a man of dubious character who is sitting on his horse with a noose around his neck – he was accused of claim jumping. Cuddy rescues the man only after getting his promise to help her deliver the women safely to Iowa. The Homesman, is another offbeat western that shows life is harsh, unpleasant and difficult on top of being pretty desolate.

Mary Bee Cuddy could be seen as the world’s first feminist, she is a strong independent woman who has money, property and standing in the community. However, her feminism is forced in The Homesman, this is a woman who is single not by choice and she is working just as hard to find a husband as she works her land. As a single woman in her mid thirties, Cuddy is strongly opinionated, gruff, and as said by about every man who interacts with her, too bossy and too plain.

This is a west not usually brought to screen. Farmers, especially in western films, are usually in the background, being burnt out for squatting on a rancher’s land or being massacred by the local Native American contingent. The Homesman focusses on the less well known aspects of frontier life and the members of society seldom featured in popular fiction about that time in America’s growth and the pursuit of the country’s expansion.

There are some odd moments in the film, one of which deals with a hotel out in the middle of the plains built by an Irishman that feels like some sort of strange non politically correct stereotypical joke, which Jones’ character in The Homesman burns down. This is really one of the stranger set pieces in the movie. While Swank turns in a brilliantly stressed and desperate performance as the heroine, Tommy Lee Jones could have phoned his part in. The box office draw has resorted to pretty much playing the same character over and over, or at least he has in this film. This can be forgiven to a degree since he is also directing.

The Homesman features Tommy Lee Jones in another offbeat western which has a star turn from Hilary Swank, decent cameos by John Lithgow and Meryl Streep along with a “blink and you will miss it” cameo by Hailee Steinfeld. The film is a tale of dogged determination and a pair of chalk and cheese characters who band together for a short time. The Homesman opens December 5. Prepare to be grimly entertained.