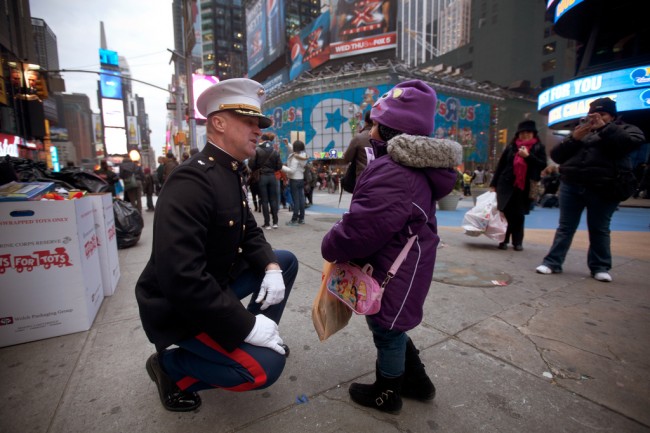 Toys for Tots is suffering from not getting enough toy donations this year for Christmas. There is only a short time left to collect toys for the program, which is run by the U.S. Marine Corporation.  Since the 1940s, it has distributed more than 400 million toys to more than 200 million children nationwide.

The organization collects toys that are new and unwrapped beginning in October and lasting through early December each year, and distributes the gifts to needy families in the local area that organizes the campaign. The Toys for Tots program connects with local organizations such as the Boys and Girls Club, churches and other organizations in order to dispense the toys before or on Christmas day.

This year, the Toys for Tots donations have suffered a severe decrease in many cities due to the economy, and cities are requesting larger donations compared to last year. Additionally, more organizations are requesting assistance from the program. The shortage extends across the country. Cities like Boston and Chicago are suffering huge decreases in toy donations and with only one week left to collect toys, it doesn’t look like the organizations will meet the demand this year. Cities are now sending out urgent pleas to the public for help. For more information on donations, they ask the public to contact their local chapter for more information.

Last year, Toys for Tots in Boston was able to meet the demand for more than 162,000 toys. This year, officials believe the demand is “well over that figure,” and may be closer to 180,000 toys or more. In Chicago last year, the organization was able to use monetary donations to buy 200,000 toys for needy children in the area. The group donated toys to 310,000 children in the Chicago and Cook County area. However, without a big influx of toys soon, the Chicago group believes it will not be able to respond to the demand this year.

Wednesday, President Obama and First Lady Michelle Obama made an effort to give the program a boost. President Obama played Santa Claus delivering gifts to the Marine Corporation campaign. The Obamas are urging the public to donate toys and do the best they can to help needy children this year. Mrs. Obama wants everyone to know that it is not too late to make a donation and made a special plea for older children. Since teenagers of needy families could use help as well, gifts of cool clothes, electronics and educational material are welcomed. The first lady further stated, “Every year it’s just a tremendous privilege to be able to be a part of making Christmas just a little brighter for a few kids across the country.”

President Obama arrived carrying two large red sacks of toys donated by the White House staff. Even though toy donations have suffered this year, the Toys for Tots organization is hopeful that they will still be able to meet the demand and deliver toys to families who need help this year.

One Response to "Toys for Tots Donations Suffer This Year"