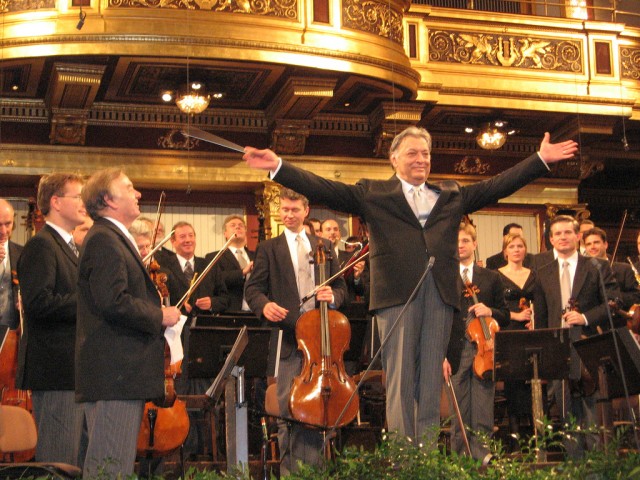 The Vienna Philharmonic welcomes in 2015 with its annual New Year’s concert from the Musikverein, or Viennese Music Association, in Vienna, Austria. The program, From Vienna: The New Year’s Celebration 2015, is hosted by Julie Andrews and is broadcast throughout the world on New Year’s Day as part of the public television (PBS) series, Great Performances. This year’s concert is conducted by Zubin Mehta, marking his fifth time conducting the New Year’s concert. Viewers should check their local listings for the broadcast time.

The concert is a combination of music, ballet, and history of some of Vienna’s most famous landmarks. While the orchestra is playing Strauss family waltzes, polkas and marches, viewers can see various sites in the city and hear the stories of these locations told by the program host. Of particular note is the famous Ringstrasse which is a circular street built to replace the 13th-century walls surrounding the old city. Also on the Ringstrasse, the Vienna State Ballet performs to Johann Strauss’ Students Polka and the waltz, Wine, Women and Song, in the main building of Vienna’s Old University, founded 650 years ago.

Besides locations within Vienna, the 2015 concert takes viewers along the Danube River to Dürnstein in the Wachau Valley. This region is well-known for both its wine growing and as a popular tourist attraction. The town is named for the medieval Dürnstein Castle that sits on a rocky hill high above the Danube. The castle was where England’s King Richard I was imprisoned from Dec. 1192 to Mar. 1193 by the Duke of Austria, Leopold V, during the Crusades. Dürr means dry and Stein means stone so since the castle remained dry above the river and was made of stone, it was known as Dürnstein.

Another prominent landmark in Dürnstein is a blue tower visible from the Danube. This was part of an Augustinian monastery that had been built in the Baroque style in the 1700s. Emperor Joseph II closed the monastery in 1788 but, almost 200 years later in 1986, the tower was restored and painted its original blue color.

Much of the music performed by the Vienna Philharmonic at the New Year’s concert is the same as it was in previous years. However, the viewers in attendance, plus those listening to the radio and television broadcasts in 80 countries, expect the familiar strains of the Radetzky March and need no encouragement to clap along with the orchestra. Another tradition is that the waltz, On the Beautiful Blue Danube, signals the Vienna Philharmonic to wish the audience a Happy New Year. After the opening few notes, the audience breaks into applause. The conductor stops, turns around, and the musicians and conductor wish everyone a Happy New Year.

The Musikverein’s Golden Hall is filled with flowers as the Vienna Philharmonic welcomes in 2015 with the annual New Year’s concert. This broadcast brings Vienna’s rich musical and cultural heritage to millions of people and is the largest classical music event worldwide. The program will be shown Jan. 1 on PBS.