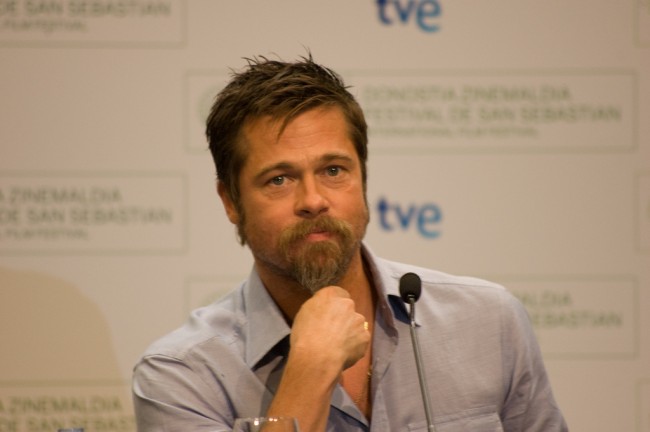 Actor and director Brad Pitt showed that he could carry a tune on Saturday, as he led a sing-along at the 2015 Palm Springs International Film Festival in California. What began as Pitt’s introducing the audience to British actor David Oyelowo, whose portrayal of Dr. Martin Luther King, Jr., in Selma, earned him the Breakthrough Performance Award for an Actor, ended with his teaching them how to pronounce the actor’s last name.

The rather unique approach that Brad Pitt took to teach the audience how to pronounce “Oyelowo,” involved his leading them in song. First, Pitt tried it out with the famous Spanish chant heard widely at soccer games, of “Olé, Olé, Olé.” Then, the World War Z actor sang David’s last name to the Coldplay song, Yellow. David’s family, sons Caleb and Asher Oyolewo, and wife, Jessica Oyelowo, were on hand to watch him win the award. Both Brad Pitt and Oprah Winfrey shared duties as executive producers of Selma.

Brad Pitt journeyed about 100 miles (160 kilometers) from Los Angeles to Palm Springs to introduce David Oyelowo. He told the audience that they needed to learn how to pronounce his name, as he would be winning even more awards in the coming years ahead.

The Palm Springs International Film Festival begins the awards season, and the movies, actors and actresses who win awards there are often an indication of the ones who will also be nominated and win Golden Globe Awards and Academy Awards. The Golden Globe Awards show will be broadcast on Sunday, January 11, 2015. The list of people nominated to win Oscars will be out on January 15, while the actual awards will be presented on February 22, 2015.

This year, Selma has been nominated for four Golden Globe Awards. While David Oyelowo won the Breakthrough Performance Award for an Actor at the Palm Springs International Film Festival, Rosamund Pike took the Breakthrough Performance Award for an Actress for her acting job as Amy Dunne in Gone Girl. She was introduced by her co-stars, Carrie Coon and Kim Dickens.

Brad Pitt declared that Oyelowo’s acting in Selma as Dr. Martin Luther King Jr. was “a masterclass performance,” one that he added “transcends imitation.” When Oyelowo took the stage, he smiled and said “when Brad Pitt sings your name,” it is a sign that “you’ve broken through,” as an actor.

Another big winner at the 2015 Palm Springs International Film Festival was the movie, The Imitation Game, which won the Ensemble Performance Award. Actress Reese Witherspoon won the Chairman’s Award for her performance in Wild, and Eddie Redmayne took the Desert Palm Achievement Award for Best Actor taking on the role of Stephen Hawking in The Theory of Everything. Julianne Moore won the Desert Palm Achievement Award for Best Actress for her acting in Still Alice.

The Director of the Year Award went to the director of Birdman, Alejandro G. Inarritu. Character actor, J.K. Simmons, won the Spotlight Award for Whiplash, and the Sonny Bono Visionary Award went to Richard Linklater, for Boyhood. Another big award of the evening was the Icon Award, which was won by Robert Duvall, for his performance in The Judge.

At the 2015 Palm Springs International Film Festival, honoring the past year’s best movies, directors, actors and actresses with awards, Brad Pitt made a splash with his vocals during an impromptu sing-along he led, showing that he can carry a tune, all to help the audience learn how to pronounce actor David Oyelowo’s last name. Though he reportedly did a pretty good job singing, he was not called back for an encore.