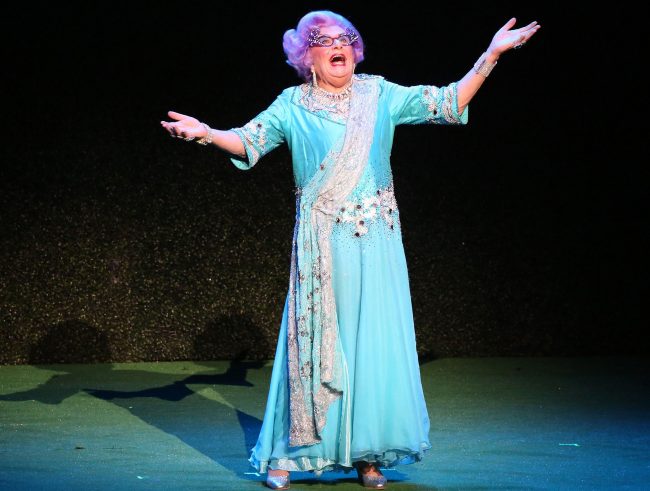 Dame Edna Everage, the mauve-haired, international superstar alter ego of Australian comedian Barry Humphries, made a triumphant return to the Ahmanson Theatre in Los Angeles this week for a nearly two-month engagement. Part of her Dame Edna’s Glorious Goodbye: The Farewell Tour, the Tony Award-winning comic is giving fans a final chance to be teased or taunted by the stand-up banter and witticisms before waving their gladdies for a fond goodbye.

For 60 years, Dame Edna has entertained audiences via stage, screen, television and books. Humphrey’s is now 80 years old now and is the outlandish drag queen shtick is a little dated. But the adoring audiences came to enjoy the grand old Dame one more time.

After the announcer introduced the evening as a cure for “people with severe or moderate depression,” the Glorious Goodbye opened with a video exposé on Dame Edna Everage featuring cameos by Kelly Osbourne as well as fellow Aussies Hugh Jackman and Geoffrey Rush, all shedding light on Edna’s secrets since emerging out of Moonee Ponds, a Melbourne suburb.

With brief musical interludes to highlight bits from her long career, the character told some elf-deprecating tales about her “a fairy tale marriage, a Grimm fairy tale” and “approaching 60, just from the wrong direction.”

Like Joan Rivers, who was instrumental in Dame Edna’s eventual U.S. success, and Don Rickles, a significant part of the evening is comprised on Edna’s exchanges with her devoted followers. The audience is the fuel that drives the evening. She has exchanges with attendees she has picked out to question and playfully humiliate. In between the individual victims, Edna takes on the audience as a whole, from the “paupers” in the cheap seats to the subscribers who purchase season tickets but leave vacant seats near the stage as “plush tombstones in their memory.”

While the exchanges do go on too long, they demonstrate Humphries’ quick wit – the hallmark of any great stand-up comedian – lacerating tongue and ability to use unscripted expressions, phrasing and banter to make the audience laugh over and over. Talking to Angelinos, the Dame demonstrates her knowledge of the area, making jokes about various neighborhoods from Pacoima to West Hollywood.

Dame Edna did offer some great lines. She talked about her visit to an ashram, which she called “a trailer park for the soul;” overeating, i.e. “digging my own grave with my teeth;” as well as cheekily indicating that “the Gospels were the Fifty Shades of Grey of their day.”

Overall, the evening was fun in a light-hearted way and certainly had everyone smiling and waving those Dame Edna standard stalks of gladioli before they left. The evening usually ends with another video (which did not work the night reviewed) before Humphries’ final bow, when he appears in manly attire sans purple wig, diamante glasses and sequins, to graciously say farewell to the audience.

Dame Edna’s Glorious Goodbye: The Farewell Tour will be available for more fond audiences to enjoy in Los Angeles until March 15. The tour then continues with appearances in San Francisco, Palm Desert, Toronto and Washington, D.C.

Photo by Matt Jelonek courtesy of the Center Theatre Group.