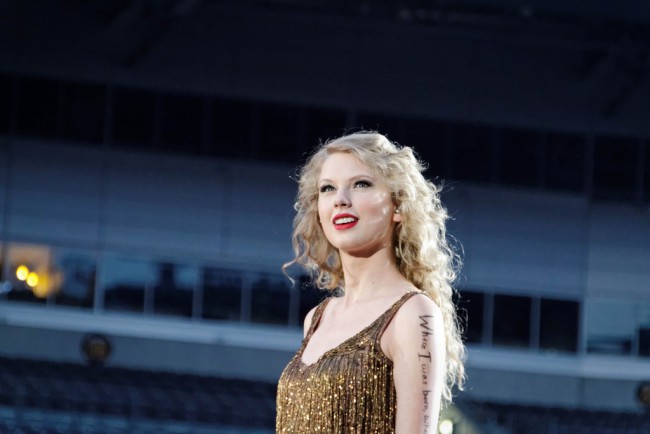 Taylor Swift has been threatened with a nude photo leak via the hacking of her personal Twitter and Instagram account, which occurred early this morning. The hackers posted in the singer’s name in order to redirect her followers to the individual social media accounts belonging to those who claim to have ties to a legendary hacker group called Lizard Squad (the alleged owners of the photographs in question.) Both accounts have since been shut down by Twitter & Instagram authorities, and the 25-year-old has since laughed off pair’s claims that they have photographs of her in a compromising manner whatsoever, let alone naked ones.

The two posts in question told fans that they should proceed to follow both of the accounts mentioned, and that they would receive a follow in return. The result, as was expected, was overwhelmingly in favor of the said hackers in that several thousands of Swift’s followers re-tweeted the posts, favorited them, and followed the accounts mentioned by who they thought at the time to be the real Swift. It was not too long before the Blank Space hit-maker became aware of what was going on, and proceeded to use her Tumblr account to inform her fans of the situation and advise them to in no way listen to the hackers’ instructions. Swift then informed Twitter and Facebook staff of the hack, and officials shut down the accounts in question as mentioned above. The Pennsylvania native then uploaded a tweet of her own, telling the hackers in question to enjoy photoshopping fake pictures to get attention because their claims are nothing but bogus and they are in possession of absolutely nothing of the sort.

The Lizard Squad is an elite group of hackers who claim to have been responsible for some extremely significant hacks, including last year’s Xbox Live and Sony Playstation incidents. They have also taken credit for yesterday’s Facebook and Instagram outage, which lasted for several hours in the evening before the servers were restored.

Swift is not the only celebrity to be recently targeted by a hacker group and threatened with the release of intimate photographs or media files. Just before Christmas, legendary organization Anonymous issued a warning to Australian rapper Iggy Azalea informing her that if she did not apologize to fellow rapper Azealia Banks ASAP, they were subsequently release still photographs of the 24-year-old’s alleged sex tape with ex-boyfriend/former manager Hefe Wine. The apology in question was demanded by the group due to a diss Azalea had directed at Banks during their highly publicized ongoing feud, which she called the Liquorice singer a bigot for insinuating that she had no handle on understand African-American culture because she is Caucasian, therefore she cannot possibly truly connect. Azalea in no way made the move to back down, saying that she meant exactly what she said and essentially telling Anonymous to bring it on and enjoy the legal ramifications of attempting to release anything of the sort of the public. The group has not yet made any advancements towards carrying out their threat.

It remains to be seen whether Taylor Swift does or does not have any sort of intimate photographs that could have been taken by the hackers who recently hijacked her social media accounts. For now, however, the singer remains insistent that the claims are ridiculous and that they are just trying to get attention.