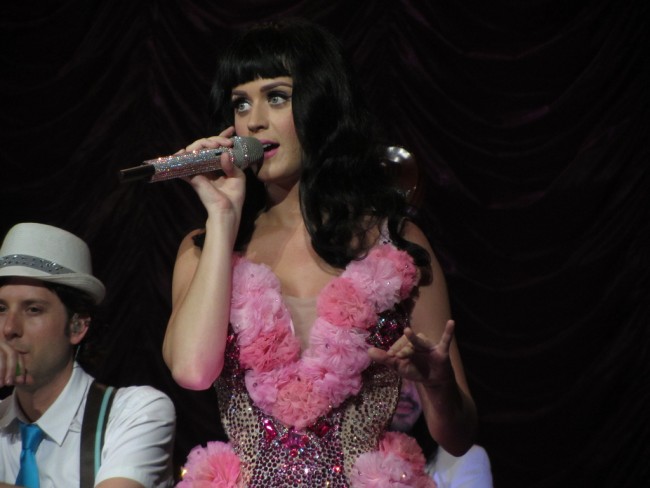 Katy Perry said in a press conference on Thursday that the Super Bowl XLIX (49) halftime show on NBC will include a lion, sharks, and fire, hinting that the costume she will be wearing at the beginning of the halftime show will involve fire in some manner. She stated that it is “going to be flaming hot — not the Cheeto.” The Super Bowl halftime show will also feature Perry’s two musical guests, Lenny Kravitz and Missy Elliott.

Roar singer, Katy Perry, said that the Super Bowl halftime show will be “wild.” Her inclusion of both fire and wildlife in the show, itself, would qualify the upcoming halftime show as being “wild.” Perry’s singing and that of her guests will likely make the halftime show even wilder.

Katy Perry will be the main star of the Super Bowl halftime show, and is expected to be onstage for around 12 minutes, though her two planned musical guests are both very talented and entertaining singers, as well. The overall audience who will be tuned in and watching has been estimated to be over 100 million people worldwide.

Some fans believe that Perry might be joined onstage by Lenny Kravitz for at least a couple of songs, with one of them possibly being American Woman. Missy Elliott is sure to add a lot of flair and great music to the show, as well.

Joking about the Deflategate scandal that occurred during the AFC Championship game, Katy Perry stated that she will ensure “nothing in my performance will be deflated.” She added that she was “excited,” about the halftime show, and said that it will be “a wonderful, fun, not-so-serious time.”

Katy Perry’s dog, Butters, made a surprise appearance at the press conference, nearly upstaging the Dark Horse singer. Butters ran onto the stage briefly, but just as quickly took off, upon noticing the huge crowd of reporters gathered there to ask Perry questions.

Super Bowl XLIX has a scheduled kickoff time of 6:30 p.m. on NBC. That would put the beginning of the halftime show at approximately 8:00 p.m. Idina Menzel will sing the National Anthem prior to the game, which should be an experience, in itself.

Katy Perry has a definite favorite in the Super Bowl. She mentioned that she will be rooting for her friend, quarterback Russell Wilson of the Seattle Seahawks. When Perry was asked if she had her eye on any of the football players, she quoted a line from Seattle Seahawks player Marshawn Lynch two times, saying she was “just here so I won’t get fined.”

Katy Perry said that, when Missy Elliott hits the stage, she predicted “jaws will drop and faces will melt.” Perry was likely correct in her statement that she will probably be “the only person in Super Bowl halftime history that will ever bring both a lion and sharks to the show.”

The Teenage Dream singer said that the Super Bowl halftime show will be, to a degree, a “throwback” show, “of sorts,” and one that “will be a real female fun night.” Lenny Kravitz will aid in the “melting faces,” department, in what is shaping up to be one of the most anticipated and memorable Super Bowl halftime shows of all time, even if it did not include a lion and sharks.