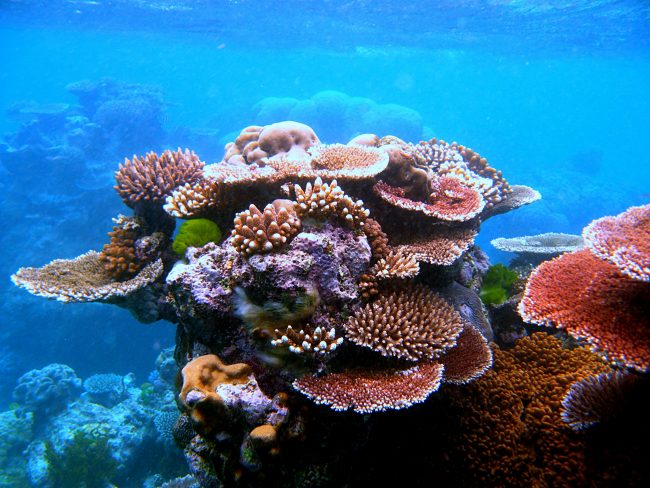 During the past year, scientists have sounded the alarm warning of an impending global bleaching event of the world’s coral, yet many media outlets failed to recognize most of their warnings until recently. Currently, many coral scientists think coral reefs are facing possible extinction, and that the reefs demise may already be in progress, worldwide.

Corals rely on their symbiotic relationship (a relationship were two organisms assist one another) with zooxanthellae, an algae that trades the coral food for a place to call home. Alone, coral is a bone white color, but coral hosting zooxanthellae are vibrant and colorful. “Bleached” refers to coral that is bone white in color. External stressors like fluctuations in ocean temperature and pollution cause coral bleaching. When a coral becomes stressed, it expels the zooxanthellae, leaving it with no source of sustenance. If zooxanthellae is not reintroduced to the coral, it will starve and die.

Global bleaching is a large-scale event that occurs when coral across the world’s ocean bleach. The first and most severe instance of global bleaching ever documented occurred in 1998 and was the result of a particularly strong El Niño. The El Niño warmed the ocean temperatures causing the loss of about 20% of the Earth’s coral reefs and crippling many coral colonies off the coast of 60 countries and islands. This year, scientists fear coral will suffer a global bleaching event similar to, if not more severe, than the 1998 crisis.

The year 2014 saw some of the hottest temperatures ever recorded, beating 1998 as the hottest year on record, and the ocean felt the burn. Every major ocean basin also registered record-breaking temperatures. In accordance, substantial areas of the Pacific experienced coral bleaching, including areas that had never seen it before. Numerous scientists feel this is just the beginning, possibly the start of a historic coral catastrophe. According to C. Mark Eakin, Coordinator of the National Oceanic and Atmospheric Administration’s Coral Reef Watch, the ocean temperatures have risen for years because of global warming, creating an unsuitable habitat for the coral to accommodate zooxanthellae. Ocean acidification is a decrease in the oceans pH caused by a rising level of carbon dioxide absorbed by the ocean and another factor in coral bleaching. Ocean acidification makes it difficult for coral to absorb calcium needed to build and repair its skeleton. Between global warming and ocean acidification, the coral are like ticking time bombs. The coral no longer requires an El Niño or like event to cause bleaching because they are already under such intense thermal stress that one wrong move can easily trigger the event.

Coral can recover from bleaching, however, it’s healing process spans decades. As the ocean continues to warm, the likelihood coral will have time to recuperate after a bleaching event is seriously diminished. This not only foretells of dire consequences for coral reefs, but for all living beings. Coral plays an essential rule for protecting, housing, and feeding many varieties of fish, providing food for nearly one-billion people world-wide. It protects coastlines by slowing the impact of waves of the ocean (hence the term barrier reef), and plays a large part in regulating the oceans levels of carbon dioxide.

C. Mark Eakin indicates it will take a serious effort to rescue coral reefs from effects of global warming, from reducing carbon dioxide in the atmosphere to reducing pollution and curbing over fishing.

Coral Reefs on Brink of Extinction Worldwide added by baker.a on January 29, 2015
View all posts by baker.a →