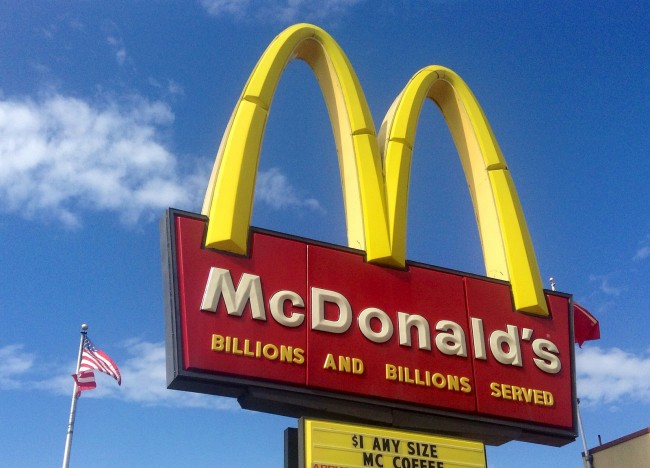 In a new campaign for McDonald’s, that will not start until after the Superbowl and will then run until Valentine’s Day, the company will be accepting expressions of love as a form of payment on select purchases. Of the acceptable forms of payment that the company will take in lieu of money, there is giving someone a kiss, a hug, doing a dance or even picking up the phone and calling mom to share one’s love. There will also be other expressions of love permitted although no word yet on exactly what those will be. This latest promotion is actually part of a giveaway called Pay with Lovin which goes along with the company’s Choose Lovin campaign which started last month.

The official announcement for this latest promotion will take place during the Superbowl and is one of the new commercials that will premier during the big game. This new commercial spot is the first one that McDonald’s has had during a Superbowl in eight years. In fact the company is known for having one of the greatest Superbowl commercials ever. That particular advertisement came in 1993 and featured Larry Bird and Michael Jordan playing a game of HORSE in an effort to win a Big Mac.

A spokesperson for the company said that this latest advertisement and campaign was a way to not only thank their customers but also a way to make someone’s day. The Pay with Lovin campaign will run from February 2nd until the 14th and will run during preselected times during the day. When a customer goes to make their purchase, with cash or credit card in hand and ready to pay, a McDonald’s employee will then tell them whether they have been selected to receive their meal for free. This means that instead of handing over cash or card, the customer will then be asked to pay with an expression of love.

While McDonald’s will be accepting payment in the form of an expression of love, there are still stipulations and limits to the campaign. In the official rules there are only 100 customers per restaurant that will be selected to receive the promotion. Not only will there only be 100 offers handed out but the restaurant has to give out 55 percent of their promotions in just the first two days. Each McDonald’s will then have to give out the other 45 percent over the course of the campaign until Valentine’s Day.

The new advertisement and campaign was teased the Sunday before the Superbowl in a 30 second spot. In the teaser, McDonald’s hinted that they would be offering a new way to make a payment in restaurants. This hook is just a precursor to the big game and the ultimate commercial.

In the McDonald’s commercial that will ultimately open the Pay with Lovin campaign, a restaurant employee talks about the forms of payment that will be accepted and ends with a heartfelt message. The end of the advertisement simply says that paying with love is all the company needs and easily sends the message that this is about more than just free food.