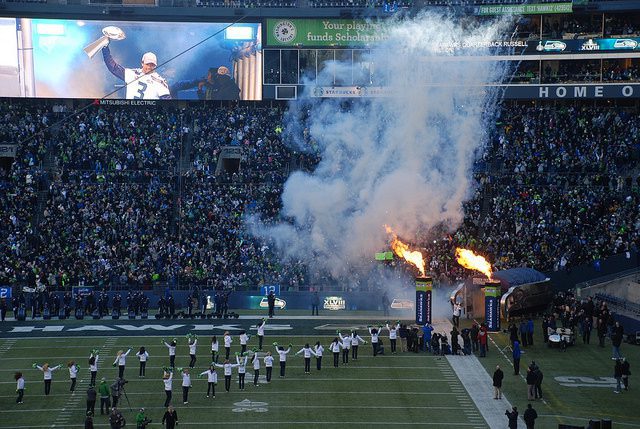 On February 2, 2014 the Seattle Seahawks won their very first Super Bowl in franchise history. Almost one full year later, the spotlight is still on them as they are just one game away from the Super Bowl yet again. The Road to the Super Bowl in Arizona has not been an easy one, and the final game will be no easy task either.

As Soundgarden and Pharrell Williams took to the stage in the north parking lot at Century Link Field, fans flocked to the stage area. The sun was shining and the NFL was in town. One of the benefits to winning the Super Bowl is hosting the opening day festivities. A full day’s worth of events before the game even started. The team that was in town that day to face the Seahawks was the Green Bay Packers.

The Seahawks looked like that had not missed a beat and were poised to defend their crown and easily make it back to the big game. They defeated the Packers 36-16. Green Bay quaterterback Aaron Rodgers did not attempt one pass in the direction of All-pro cornerback Richard Sherman.

In week two, the Seahawks went down to San Diego to face the Chargers in the 117 degree sun. The Chargers defeated the Hawks 30-21. A home win against the Denver Broncos, and the Seahawks had a 2-1 record. After a Monday Night Football victory in Washington against the Redskins, the Seahawks hit possibly their biggest bump of the season. The Dallas Cowboys came in to Seattle and beat them. This wasNice art only the second home loss in the last three seasons.

After the loss to the Cowboys, the was turmoil in the locker room. On the final drive of the game, Hawks receiver Percy Harvin would not come off the bench when his team needed him. This act proved to be the final straw and the team parted ways with him the next week. The Seahawks then went on to lose to division rival, St Louis Rams after two key trick plays on special teams.

Sitting with a 3-3 record, and three games behind the Arizona Cardinals for the NFC West, many thought the Seahawks would be lucky just to get a wild card birth. The talk on Seattle radio turned from, champions, to “they will be lucky to just get in the tournament.”

Following a week 11 loss in Kansas City, with a 6-4 record the team held a players only meeting. With doors closed to media and coaches, we may never know what was said in the meeting. No matter what was said, the results of it are something spectacular. The team has not lost since that November day.

Six straight wins, and a loss from the Packers gave Seattle the number one seed for the third time in franchise history, and the second time in two seasons. Following the bye week, they were able to beat the Carolina Panthers in the divisional round of the playoffs. A stellar performance from Kam Chancellor on special teams and defense helped send the Panthers packing.

Now with just 60 minutes of football left to play, the Seahawks will need one more amazing performance. Aaron Rodgers may have an injured calf that limits his mobility, but he is still one of the best signal callers in all the league.

The spotlight will once again be in Seattle for the NFC Championship game. The stadium will be full and loud. Kickoff is at noon, and the game will be aired on Fox. The winner of this match up will have to wait until the end of the AFC Championship later on Sunday to find out if they will be playing the Indianapolis Colts, or the New England Patriots.