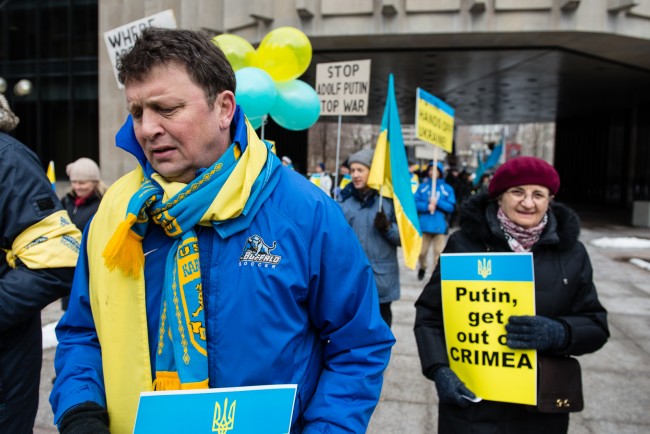 With recent reports of continued aggression towards Ukraine, President Vladimir Putin’s promises of last week are a fading memory. French President Francois Hollande communicated last week via radio that Putin had no desire to annex eastern Ukraine. This seemed a somewhat plausible assertion at the time, but after drone footage was released which revealed that parts of the city of Donetsk had been bombed, including a hospital, there is little hope for reprieve.

Russia had been prepared for all but bankruptcy economically until just recently when the Ruble’s fall from grace seemed to stabilize. There were questions whether the nation was going to be able to find camaraderie in European countries like France and Hungary. There were, and still may be, talks of lightening the heavy sanctions that have been placed upon the limping super power. With these continuing acts of aggression on Putin’s part, it would not be surprising to anyone, including Russia, if these talks were brought to a halt.

During the eight-month period from April to December last year, there were 4,700 deaths and 10,300 wounded in this ongoing attempted-usurpation of previously governed Russian land. With this new upheaval of violence there is little doubt that the number of victims will increase. Many who watch this unfold cannot help but ask questions about why this continues and why there are such mixed reactions from European nations and the U.S. It is true that the U.S. is the least impacted by the sanctions.

The U.S. has had few trade relations with Russia in comparison to nations such as France. Residing near and trading with the disgruntled Bear in the past has created a necessity for continued trade for some of those in close proximity. Whether these who are semi-sympathetic may be able to aid in persuading Russia to restrain itself from further violence should be a tactic not left from the negotiator’s arsenal.

With oil prices still dropping, which is drastically affecting one of Russia’s prime sources of income, it could be assumed the Kremlin is feeling pressure. Although with the continued military action, international scholars may be curious as to whether Putin has a card up his sleeve.  The fighting in Ukraine, as destructive as it appears in this recent footage, only uses a portion of the nation’s resources.

Russia is challenging the strength of NATO by expanding ever-so-slightly while still retaining a sense of isolationism in an effort to build industrially and agriculturally. If this is true, the length of this war could be much longer than anyone had anticipated. Monday morning saw the Russian ruble take another 2.5 percent dive against the dollar. The ruble has dropped 85 percent when compared to the dollar since this conflict began in 2014. Russia’s investors, let alone its citizens, cannot look upon this economic downturn with confident eyes.

Even with talks of lessening the sanctions on Russia, Putin has not slowed his aggression, and has continued to defy his critics. Putin has sent letters and spoken with presidents of other EU nations expressing his desire to withdraw his heavy artillery from areas such as Donetsk, however, little has been done to demonstrate a change in his pursuit of usurpation. Whether Russia will pull out of its seemingly inevitable bankruptcy will be a test for it as well as Ukraine, as they have come to be the victims of Russia’s change in policy.