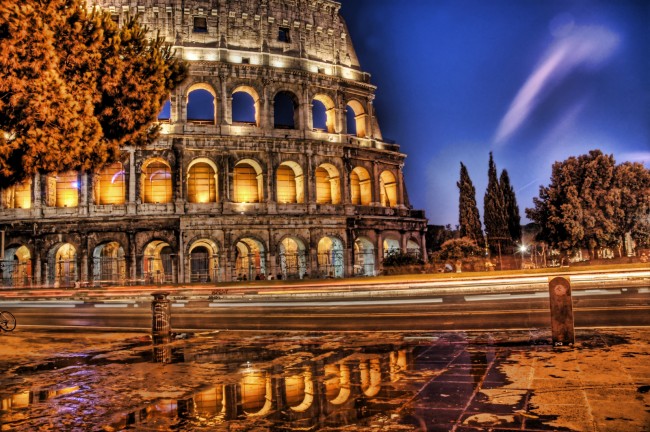 When enjoying a Rome vacation, this historic city offers many popular and well known attractions, but how about taking a trip a little off the beaten path. There are some strange and unusual spots to visit, known mostly to the locals, and as the old saying goes, “When in Rome, do as the Romans do.”

Visiting the Colosseum during a Rome vacation is a no-brainer. Everyone does it. Seeing the Pantheon, throwing coins in the Trevi Fountain, the Sistine Chapel and the Roman Forum, are all wonderfully worthy places to visit and photograph. However, anyone that has already “done” the popular sights on a previous Rome vacation might be looking for something a little different. A couple of fascinating suggestions are included here.

The first stop on an unusual Rome vacation is a former Roman prison, located on the northeastern slope of Capitoline Hill. The Mamertine Prison (pictured below) is situated underneath the church of San Guiseppe dei Falegnami and apparently the building was constructed somewhere around 640-616 BC by one Ancus Marcius, the legendary fourth king of Rome.

Originally built as a cistern to house a spring, it was re-purposed by the Romans as a prison, with its inmates lowered into the gloomy dungeon through an opening in its roof. Inside the prison is an altar commemorating the legend that Saints Peter and Paul were both imprisoned there. While the altar is decorated with an upside-down cross, this does not have a satanic meaning. It was hung that way as a reference to St. Peter, who was, apparently, crucified upside down. Also on the altar are two busts, one of St. Peter, the other of St. Paul.

Needless to say, this was most likely not a great place to be imprisoned, but it is certainly an interesting attraction to visit on a Rome vacation. The video included in this article shows the way to this eerie prison and gives a brief tour:

Next stop on a Rome vacation off the beaten path is the “Bocca della Verità” or “Mouth of Truth.” The carving is in the portico of the Santa Maria in Cosmedin church in Rome and is thought to be part of an original, first-century Roman fountain, displaying the image of a Roman god. Others theorize that it could have been an ancient manhole cover and that it portrays the pagan god of the river Tiber.

Whatever the background story is, nowadays the eerie carving is said to work like an ancient lie detector. Allegedly, anyone who puts their hand in the mouth and tells a lie will have that appendage bitten off. This fascinating carving starred in the 1953 romance film “Roman Holiday” starring Audrey Hepburn and Gregory Peck and the rather humorous clip from their Roman vacation is included below:

While it may not be polite to peep through keyholes, there is a nondescript door up on the Aventine Hill in Rome that offers a beautiful, framed view of the dome of St. Peters.  The building is the Priory of the Knights of Malta, a legendary religious order, but there have been many prior occupants of this fascinating structure.

Starting out as a fortified palace for Alberico II, who ruled Rome from 932-954, it then became a Benedictine monastery before ending up housing the Knights Templar in the 1100s, then followed by the Knights of Malta.

Nowadays the building is a church, called Santa Maria del Priorato, but the keyhole still lines up perfectly with the building’s own garden, offering a scene of the Vatican and St. Peters in the background. It is unknown whether the view was planned or just a lucky coincidence, but these days it is tourists who peek through that enigmatic keyhole, not knights.

Many more fascinating attractions lie in wait, whether hidden or off the beaten path, while enjoying a Rome vacation. When in Rome, it is always best to ask a friendly Roman to show the way.