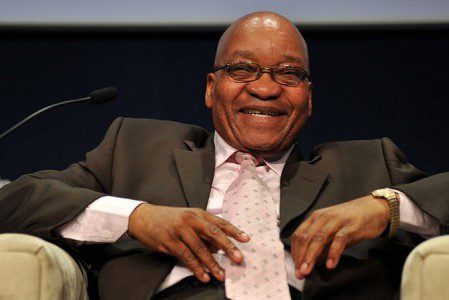 Cape Town, South Africa hosted the 103rd Birthday celebration of the African National Congress (ANC) on Saturday, and President Jacob Zuma emphasized the historical struggle for liberty. Zuma likened the ANC party progress to that of a good wine, getting better with age. A series of mini celebrations around the Cape Town area, were held prior to the grand finale party where 60,000 people were expected to attend.

Delivering a provocative 23-page speech, Zuma told the enthusiastic crowd the ANC party would always remain a strong party, based on the historical formidable ancestry. Zuma was not short on praises for the ANC party and boasted that the party was the only political party with sound policies. Zuma said people never learn and leave the ANC to form political parties that fall apart swiftly.

Supporters from all around South Africa were brought to the mother city of Cape Town for the birthday bash. Zuma along with other leaders commented that Western Cape was ruled by the wrong people and vowed to reclaim this province. Blade Nzimande claimed the Western Cape remained defenders of minority power.

Taking a swipe at opposition parties, especially the Democratic Alliance (DA), the governing party of the Western Cape, Zuma said the plight of black people was ignored. Referencing this remark on predominate white and colored areas, as opposed to the townships and Cape Flats where poverty remained a problem. President Zuma appeared confident that the ANC will reclaim the Western Province from the DA party, in the 2016 municipal elections, paving a way to win an overall majority in the next national election of South Africa.

Zuma promised to take the ANC party back to its core values, the basics, and good governance as set out in the Freedom Charter, adopted by the people of Kliptown in June 1955. The Freedom Charter declares that the people govern South Africa and the country belongs to all the people. It also stresses equal rights and a share of the country’s wealth, as well as agreement to share the land.

Zuma said the local government must maintain providing services and fighting corruption. Cadres of the ANC movement based around the country must continue with the ongoing elimination of poverty and work harder to ensure proper governance. Moreover, Zuma told the young ANC members to imitate the heroes of history and remain militant but disciplined.

Zuma assured the country that the slow land restitution over the past twenty years would speed up and committed to return the land to the people. Zuma confirmed that the correct procedure of land re-distribution as defined in the Constitution of a willing buyer, as willing seller lingered on with unacceptable results. Zuma also told the crowd a new act would be passed this year, and in combination with the Constitution, land expropriation will happen in South Africa.

The severe problem of power supply and the practical solutions would remain a top priority for the ANC government. Zuma also gave assurances that the government would continue to investigate the energy crisis plaguing South Africa and seek alternative options.

The elderly members and supporters of the ANC party were thanked for their loyalty. The ANC government has ruled South Africa for 20 years, and on April 27, 1994, the manifesto of the ruling party stated that the ANC was proud of the past, as well as confident of the future. The ANC manifesto is an astounding document proclaiming an apparent plan to build a better life for all the people of South Africa. The governance of the ANC, according to the manifesto, would be based on the principles of equality, non-racialism, and a stable economy within a peaceful and secure environment. The declaration includes good governance, education, housing, healthy economy, and freedom of speech.

The promises of the 1994 ANC manifesto have not been adhered to over the last 20 years. The rapid decline of service deliveries, deteriorating infrastructure, and high rise in crime tell a different story about South Africa. It is gratifying to hear President Zuma state that the ANC government will move forward with good governance, removing corruption, and unite South Africa as a real democratic country.