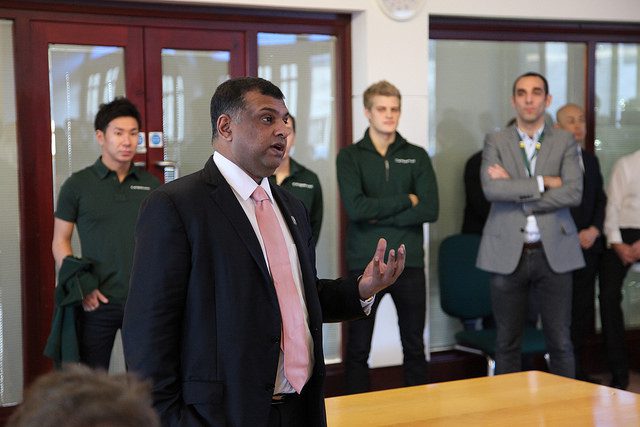 Tony Fernandes’ exceptional approach to the current AirAsia crisis is drawing attention. How the airline and Fernandes handled the incident does not escape the public while analysts and members of the media are, so far, impressed.

Last Sunday, when radar lost an AirAsia Airbus A320-200 which had 162 people on board, Tony Fernandes, the airline’s chief executive tweeted it is his worst nightmare. AirAsia flight QZ8501 departed early morning from Surabaya, Indonesia for Singapore but never arrive to its destination. Search is ongoing and has been narrowed to Karimata Strait, southwest of Pangkalan Bun, in Borneo’s Indonesian area, where remains of the mishap were found, such as bodies, luggage and some parts of the aircraft.

Along the way, Fernandes was transparently in the frontline – encouraging his employees to pray for strength, speaking to the families of the people aboard the missing flight, meeting Indonesia President Joko Widodo and the media, as well as expressing his sensitive feelings through Twitter. He was also present in Pangkalan Bun, about which he tweeted tactfully the “soul-destroying” feeling upon seeing the parts of the airplane and the dead bodies retrieved from the water.

Also known for his larger than life image, the way Fernandes handles the crisis faced by the airline is commendable. The company has been keeping an almost pristine safety record, with its reputation as among the great successes in budget travel, as reported by the Wall Street Journal. According to the New York Times, the airline pioneers budget air carriers, with its famous low-cost service that does not compromise safety. While Europe bans some Asian airlines because of poor safety records, AirAsia is an exemption, as it never had a fatal accident.

Tony Fernandes’ approach to AirAsia crisis is drawing attention and his hands-on management depicts the business philosophy he used to bring the state-owned airline, which was dwindling 13 years ago, to its position now as Asia’s biggest budget carrier. In the early years, he was the public face and chief promoter of the brand, at times working with employees in the operations – with cabin staff on flights, bag handlers or at reservation desks.

Born of a doctor father from Goa, India and a business woman mother from Malacca, Malaysia, Fernandes went to Britain at age 12 to study. He is an accountant by training and has worked for Warner Music. British budget carrier Easy Jet founder Stelios Haji-Ioannou is what inspired him to bring the concept of low-cost airline to Asia. He saw the opportunity with AirAsia, which then belonged to a conglomerate of the Malaysian state.

AirAsia keeps on cutting costs, to be able to offer low fares, but still keeping safety, quality, and revenue while facing stiff competition as other operators started to jump into the low-budget bandwagon. The airline has extended operations to Thailand, Indonesia, Philippines and India.

While Tony Fernandes’ approach to AirAsia crisis is drawing attention, the QZ8501 tragedy is perhaps the most difficult challenge which the top executive will undoubtedly face head-on. He is still the man who takes responsibility and positions himself at the center, even in the worst times. The very person who brought the company from scratch to the top is now visibly taking charge again.