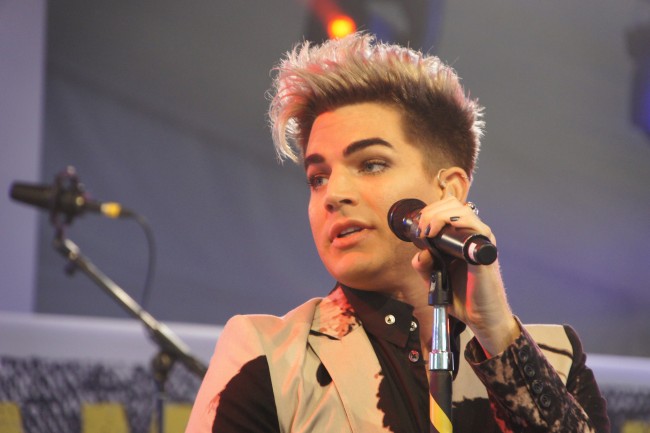 Adam Lambert has been a very busy man. In recent weeks the singer has battled back from a bronchial infection, continued his tour with the legendary rock group Queen, worked on recording his latest studio album and attended events such as the Grammys and Brit Awards. While discussing not only his tour with Queen but also his upcoming album, Lambert would not discuss who he was collaborating with in the studio, but he did talk about who he would like to possibly work with in the future.

Among the singers that Lambert has indicated that he would like a chance to work with were Ed Sheeran and Sam Smith. The singer has even said that he is basically in awe of all of the British talent out there at this time. Lambert stated that he would love the opportunity to actually get into a studio with some of the big names in current British music. In fact the current Queen front man said that he was a huge fan of Smith and was excited for the other singer when he won so many awards at both the Grammys and Brit Awards. When talking about Smith and his awards, Lambert said that not only was he not surprised by the wins, but that the other singer has earned all of the accolades that come his way.

While Lambert might be interested in a possible collaboration with the two British singers, he may not be the only one interested in getting a chance to work with the award winners. Both Sheeran and Smith were big winners at the Brit Awards which were held on Wednesday in London at the O2 arena. The two singers each took home two awards with Sheeran winning British Album of the Year and British Male Solo Artist, while Smith won Global Success and British Breakthrough Act.

Sheeran and Smith were not the only names that Lambert mentioned when discussing the talents of the British singers. He also mentioned Jess Glynne and Ella Eyre when talking about the impressive vocalists of the United Kingdom (UK). While speaking to the Daily Mirror, Lambert shared his belief that the UK is pushing out some of the most amazing talent. Many of the singers that Lambert was referring to were on hand for the Brit Awards. In fact he said if there is a current popular singer, then they are probably from the UK at this point.

In talking about his own upcoming work, Lambert stated that he could not discuss his collaborations on the album. His next release is being described as a mix of dance and electronic music and while he confirmed that there would be collaborators, he was unfortunately unable to give any more details. In speaking about the upcoming release, Lambert promised that there would still be some of the R&B flavor mixed with pop that his long term fans are already familiar with. Fans should be on the lookout for Lambert’s first single from the upcoming studio album as soon as next month, while the full release is scheduled for this summer.