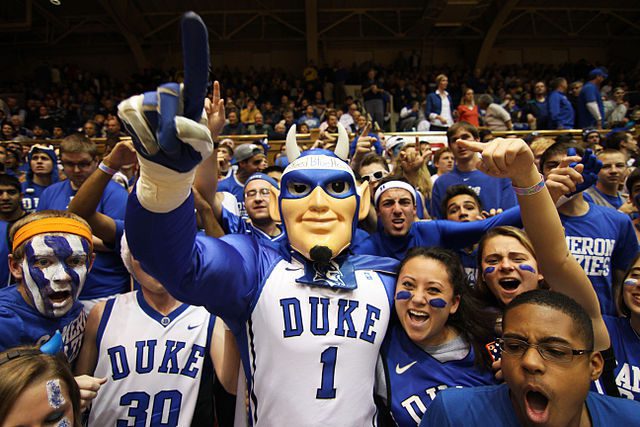 Only about a week before this matchup Notre Dame won an extremely close game over fellow ACC title contenders Duke by a score of 77-73. That game clearly left a bad taste in the mouth of the Blue Devils because in the rematch at Cameron Indoor they dominated the fighting Irish winning by a final margin of 90-60.

The game started with Notre Dame looking the more aggressive team getting out to a quick 6-0 lead. After a slow start Duke turned it on and never looked back dominating the game from there on out. Not only was their offense high-flying and impressive especially in transition, but their defense was almost equally impressive holding a very good Notre Dame team under 20 points until about two minutes to go in the first half. What was even more impressive during Duke’s amazing first half run was the fact that for a major part of it they had to play without their star freshman big man Jahlil Okafor because of early foul trouble.

Duke held Notre Dame to their lowest scoring half all season in the first going into halftime leading 50-24. In the second half it was more of the same from the Blue Devils as they continued to dominate the Fighting Irish on both sides of the ball. Duke’s freshman trio of stars Okafor, Tyus Jones and Justice Winslow were extremely impressive on the national stage showing they can bring it in big games, and that will only help them later on in the extremely tight ACC title race. The three freshman seemingly took turns taking over the game Jones does an amazing job leading his team and making everyone around him better his passing and court vision are very polished for a freshman point guard. Winslow’s aggression and hustle led him to have a great scoring second half and he pushed the pace and finished extremely well at the rim ending the game with 19 points and eleven rebounds.

Jahlil Okafor is widely regarded as not just the best freshman in the country but probably the best overall player in the nation, and this win over Notre Dame only proved that further. Even after missing much of the first half with foul trouble he came back in the second half and dominated. His offensive game may be the most polished of any big man in the country let alone a freshman only about halfway through his first college season. Some NBA big men do not have the polished offensive moves that he has and that fact will be very scary for opponents in the run in to the NCAA tournament.

The ACC is insanely congested at the top of the standings and this was a huge win for Duke who currently sit in fourth place in the conference, even though they are also currently ranked fourth nationally as well. Virginia, Louisville, Notre Dame, Duke and North Carolina are all ranked in the top 12 nationally and currently all within 1.5 games of the ACC lead. Virginia and Louisville are the top two teams right now as it stands and they will play the same day as this matchup. Even though it was a crushing loss for Notre Dame because of how dominant it was, it was not the worst thing to happen, as it was only their fourth loss on the season.

Duke completely dominated Notre Dame 90-60 in a matchup of the number 4 and number 10 ranked teams nationally. Duke’s recent brutal run of tough games is now over, at least on paper, but they still have two matchups against their bitter rivals North Carolina who are currently 12th in the nation before the postseason starts.