By Chanel van der Woodsen on February 26, 2015No Comment 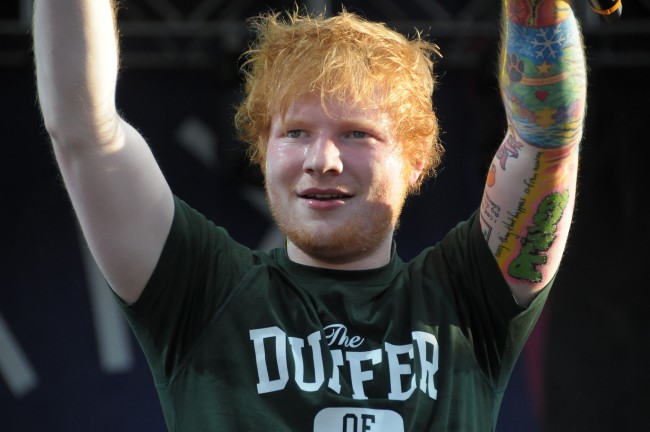 Ed Sheeran made the most of his double Brit award win last night, taking it out onto the town and celebrating until approximately six in the morning. Halfway through his partying adventure, he was joined by fellow British superstar Sam Smith, who joined him at popular London hotspot The box, and the pair shared a car together at the end of the night to return to their respective residences.

The 24-year-old’s first stop was an after-party at London’s Freemasons’ Hall, before which time he had enjoyed some champagne and Caronas in the limo of which he arrived at said location with. As the night goes on, Sheeran gets noticeably more intoxicated (said timeline is courtesy of TMZ’s photo album of the event in question), and at one point meets up with yet another British pop star, Rita Ora, in order to collaborate on the mic at said caberet nightclub.

Sheeran’s partying escalated to the point at which one of his handler’s had to keep a steady watch on his ability to stay upright, which they did by keeping a steady hand on his person during his relocation from one place to the next. Closer to the end of the night, shortly before Sheeran met up with Smith and shared the aforementioned car ride home, the Thinking Out Loud singer’s ability to walk on his own was slim to none.

Indeed, the last few photographs in the aforementioned TMZ album show Sheeran’s handlers struggling to keep the Hebden bridge native standing at all, sometimes needing to keep an entire arm under his person in order to support him as he made his way out of the respective drinking establishment.

In one instance, it took two individuals to ensure that Sheeran made it safely to his car without falling down along the way. When the singer was finally placed into a cab and set on his way, he maintained a fixed position of keeping his head lowered and his hands clasped between his lap, presumably to keep a straight head and not succumb to sickness due to the aforementioned heavy amount of alcohol Sheeran had consumed during the night.

Sheeran is certainly no stranger to wild antics and partying ways. Indeed, those who have heard the lesser known songs on his albums can certainly attest to this fact. Many of the singer’s non-singles detail his experiences with heavy alcohol and drug use, as well as engaging in various raves/parties on a regular basis. He is also known for what is now quite an infamous love triangle; between him, fellow British singer Ellie Goulding, and One Direction member Niall Horan.

Sheeran’s song Don’t is said to detail said encounter, which involves Goulding and Horan engaging in romantic relations while the girl was supposedly in some kind of non-committal relationship with Sheeran. Sheeran, however, says that he is currently over the matter in all senses of the word and holds no grudge against either individual whatsoever.

There is no word as to how exactly Ed Sheeran is feeling following his intense night of hard partying after his double Brit Award win last night. However, it is to be assumed that he is feeling less than 100 percent given the aforementioned pictures that have been circulating the internet detailing the event.