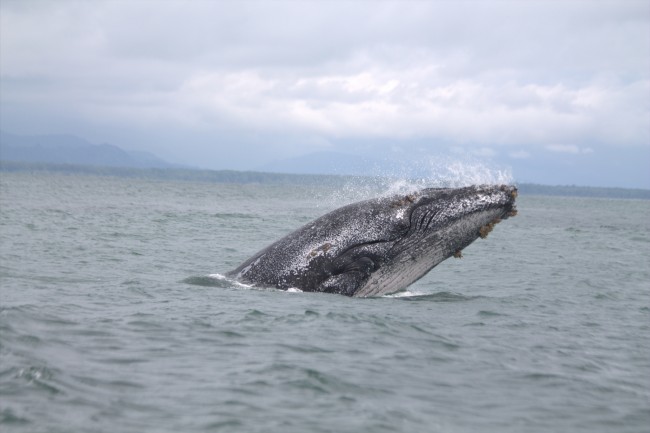 On February 13, 2015, a humpback whale, which is an endangered species, was observed off the coast of the Big Island of the Kailua-Kona entangled in fishing line. This humpback whale weighed approximately 45 tons and was trapped in this fishing line for over a week.

In order to free this massive animal, the crew for the Hawaiian Islands Humpback Whale National Marine Sanctuary were able to get within 10 feet and use a pole to cut away the 100 feet of what entangled this animal. Although the humpback whales  are massive swimmers, when whales cannot free themselves to move about in the water, the results maybe drowning, starvation, infections, or the possibility of being hit by a ship.

Scientists have documented that humpback whales have magical sounds that continue for hours. These sounds can be heard for great distances. The sounds are in the form of moans, howls, cries, and other noises. The meaning of the sounds is not clear, however, it could be related to a mating call.

At the beginning of the 20th century, the global population of whales was decreasing due to commercial whaling.  By 1993, it was documented that there were 6,000 humpback whales in the Northern Pacific Ocean. The Endangered Species Act, Mammal Protection Act, and an international ban on commercial whaling has helped the population of humpback whales to increase to 21,000.

The movement for migration is annual. Humpbacks go toward the poles for their summer feeding and toward the equator during the cold season.

A mother and her young whale swim close together and touch often as a sign of affection. The young are nursed for about a year, although, the actual growth spurt lasts for about 10 years.

The humpback whale belongs to the family that includes the blue whale, the fin whale, Bryde’s whales, sei whales and minke whales. About 10,000 of them travel to the Hawaiian waters as their winter watering ground.

Humpback whale entanglement may occur due to the fact that feeding, mating, and taking care of the calves takes place near the shore. Humpbacks are slow swimmers, and therefore, they become easy targets.

There are approximately 300,000 aquatic mammals killed as a result of entanglements. Since 1984, the Center for Coastal Studies has had to help release more than 200 large whales from their entanglement dilemmas. This center is the only federally authorized organization on the United States east coast that can untangle the large free-swimming whales like the humpback.

It was noted that more than 50 percent of the whale mortalities have been related to some sort of entanglements or boat strikes. A Disentanglement Network was established in 1994 in the United States and Canada. The members of this group were tasked to provide immediate attention to entangled marine animals. This network was funded by the National Fisheries Service in the United States water. The members of this group are people with extreme experience with whales.

A northern right whale became entangled off the coast of Florida in 1996. This prompted the need to expand the rescue program along the entire east coast. In 2002, the Hawaiian Islands Disentanglement Network was established to ensure that humpback whale entanglements will not happen nor the issues created from marine debris.