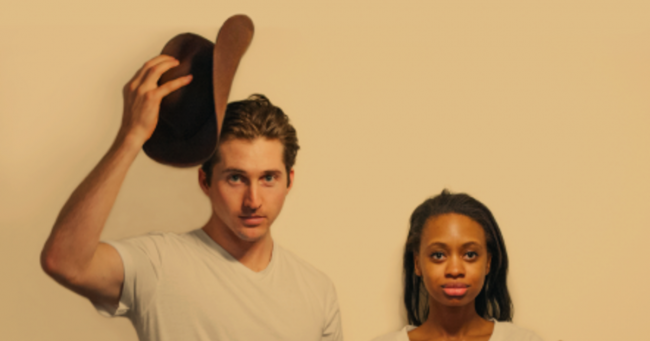 Los Angeles is known as a worldwide capitol for entertainment, particularly its mass production of television and film projects, but one must not forget the equally entertaining theatre community that exists in the City of Angels. The Company Creation Festival has featured a number of original plays this year and one of note is the beautiful new work known as Denim.

Julie Taiwo Oni is the creator of this play as well as a co-producer of the project alongside Terrence Colby Clemons who is making his Los Angeles directorial debut with Denim. The official director’s note of the show is as follows:

“’See me.’ Everyone wants to be Seen. To be Heard. Understood. Acknowledged. Loved. It’s the foundation of our deepest connections; some will have it at any cost. ‘See Me.’ This message lies at the core of our gut-wrenching play: thumping, beating and scratching at the hearts of these two people. ‘See. Me.’ I invite you to come away with us on their journey to be seen, set in Bakersfield, California, the eighth most conservative city in the country, in 1996, two short years after the end of Apartheid in South Africa”.

Los Angeles native Taylor Hawthorne stars as the female lead, Sammie, a black young woman, only fifteen years of age, from South Africa opposite of Eric Schulman as Tom Anderson, the American heartthrob television star. Eric and Sammie are brought together by an ad campaign photo shoot for Levi Strauss. The denim company is creating the aforementioned ad in order to advertise in Cape Town and raise the morale of lower class South Africans.

Hawthorne brings a vast presence of strong will to the character of Sammie with an exuding amount of fresh energy that consistently draws in the audience. Her take on the material is handled with the utmost care and the actress’s technique is simply astounding. One aspect of the Los Angeles native’s performance that is to be commended is her spot-on portrayal of the South African accent. If one does not read the star’s bio before the performance, she could easily be mistaken as an actual South African woman.

Schulman brings an enthralling level of control and emotional depth to the role of Tom. His character is faced with the epiphany of his privileged white entitlement and is given the chance to see the world in a new light through his meeting with Sammie. Schulman’s role could very easily fall into an unlikeable performance due to his source material, but the actor finds a number of nuances that allows audiences to sympathize with the character and follow him on his journey of discovery.

Clemons’ direction and staging is beautifully laid out and completely envelopes all the space that the Son of Semele theater has to offer. Oni’s writing is very intricate and the playwright executes a number of vital political statements in her work whilst provided a thoroughly enjoyable piece of theatre. Tammy-Anne Fortuin and Khwezi Magwaza serve as script consultants, assuring that all South African references were as authentic as possible. As the audience is completely taken into a new world, it would seem that Fortuin and Magwaza have performed their duties very well.

Los Angeles audiences will not want to miss Denim presented by MaiM Theatre Company. The play has received a well-deserved extended run with the final four performances being Feb. 5, 6 and 7 at 8:00 PM and February 8 at 5:00 PM. Demin is performed at the Son of Semele Theater in Los Angeles and tickets can be purchased at the link in the sources below.