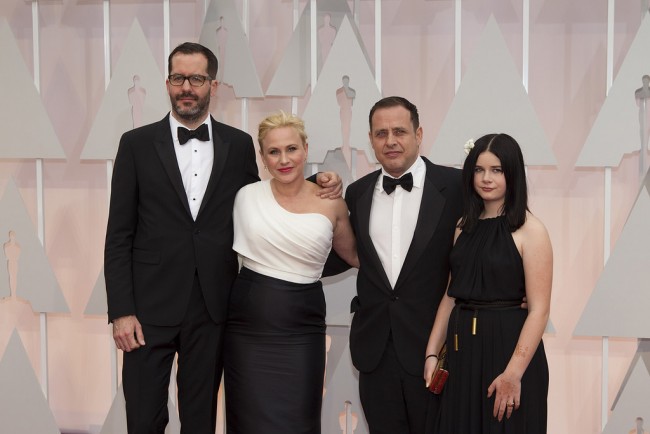 Patricia Arquette used her first Oscar speech for political reasons. The actress took to the stage to call for equal rights for women in the United States. She received a standing ovation from women in the audience, including the likes of Meryl Streep.

Arquette won the award for Best Supporting Actress in Boyhood. It is her first Academy Award, despite being nominated in the past. She is not the first to use her speech for political reasons, but is one of the first to receive such a supportive applause afterwards. There are now a number of GIFs going around social media supporting her decision to include equal rights for women in her acceptance speech.

During the speech, she thanked every woman for giving birth to the taxpayers of the nation. She then continued to say that it was time those in the United States got equality once and for all. It is the true nature of feminism, and Arquette got her point across elegantly.

Streep, who was also nominated for Best Supporting Actress, stood and screamed at the speech. Many others joined in with the round of applause for Arquette’s decision. However, the actress never saw her fellow nominee’s reaction, admitting that she had missed it during a backstage interview after the awards ceremony.

After Arquette used her Oscar speech for political reasons, she did hug Streep. She went on to say that “equal means equal,” and that older women make less money. She touched on the fact that America is hypocritical in its actions. It speaks about equal rights for women in other countries, but then fails to deliver on its own people. A Superior Court justice mentioned just two years ago that women do not get equal rights in America because of the Constitution. It was never written with women in mind.

She did not stop on equal rights for women, either. Arquette is very pro-gay rights. She said that it was time for the LBGT society to have equality, as well as “people of color.”

Boyhood was a movie all about growing up and learning the ways of the world. While it follows six-year-old Mason as he grows up to be an adult, Arquette’s character as Mason’s mom also grows up along the way. The movie helped Arquette win her first Oscar, and she has also won a BAFTA Award, Golden Globe and Screen Actors Guild Award.

She beat the likes of Streep, who was nominated for Into the Woods, Keira Knightly for her role in The Imitation Game and Emma Stone for Birdman. She said that it was an honor to finally be awarded her first Academy Award, and did use her speech to thank the people who got her to that point. However, that was just a small part of her acceptance speech.

Once she thanked her parents, children and the cast of Boyhood, she went onto pay tribute to charity GiveLove.org, which focuses on sanitation and she formed after the earthquake in Haiti in 2010. Arquette then used her Oscar speech for political reasons to show her support for equality for all.