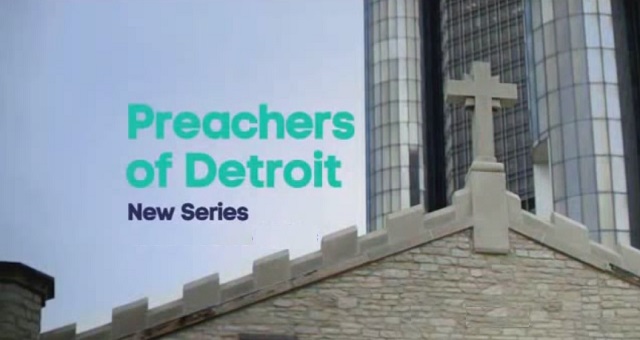 The Preachers of Detroit, the newest spinoff from the controversial show Preachers of LA, premieres next week and will introduce a new set of preachers who have united to bring positive change to Detroit. This reality spin-off will showcase seven different perspectives from local ministers within their different churches as well as personal aspects of their lives.

The franchise has fans and critics alike. Some feel this type of series is not good for the church’s image but apparently is good for the Oxygen network’s ratings. Preachers of LA was the highest rated-freshmen series to ever hit the network. This means for those who did not believe a show centered on preachers could bring excitement, drama and pompous personalities were proven wrong. Reportedly, the five men and two women being showcased in Detroit will not disappoint. This show has all the drama one would anticipate in the world of reality television.

Preachers of Detroit is the first of several spin-offs in the making. The network also has plans to take the franchise to Atlanta, Dallas and New York. Minister Deitrick Haddon, who has already become a fan favorite for the LA franchise, wanted to bring the project to his hometown. The singer knows many have criticized the lavish lifestyles and lucrative careers of preachers but hopes the franchise also restores people’s hope in the Gospel. Deitrick wants the world to know that ministers are real people with real issues like everyone else. The goal is for those courageous enough to display their “humanity” would bring renewed hope to a world of imperfect people. The Detroit cast includes the following:

Bishop Charles H. Ellis III – He serves as the Senior Pastor of Greater Grace Temple. Bishop Ellis is well-respected as a prominent figure in the religious community across the country. His mega-church hosted the funeral service for civil rights icon Rosa Parks and other historical events.

Bishop Corletta Vaughn – She is one of the world’s most prominent women of faith and has broken the gender barrier for many. She is the Senior Pastor of The Holy Ghost Cathedral and serves as Chief Apostle to Go Tell It Evangelistic Ministry Worldwide, where she oversees at least 1300 ministries on a global scale and 70 nationally.

Pastor Tim Alden – he was seen on the Preachers of LA where he was noted for proudly proclaiming in his early fifties he is still a virgin. He has since returned to his Detroit roots where he ministers at the City of Praise Christian Church with a focus on purity and abstinence.

Pastor David Bullock – He is an outspoken minister who is also a well-known activist throughout the city. His first love is serving as the leader of the Great St. Matthew Baptist Church but he also plans to run for office in hopes of making substantial changes to the city of Detroit.

Bishop-Elect Clarence Langston – He who the Founder and Senior Pastor of Word in Action Christian Center. He is known for being brutally honest but his controversial approach to the message of Christ is not always well received by his peers in ministry, primarily because of his young age.

Pastor Don William Shelby Jr. – He has three churches under his tutelage, manages his family’s singing career along with the success of his renowned church choir. His family life, managing career and pastoral duties keeps this minister spread quite thin, but he is determined to succeed in all of his responsibilities.

Last but not least,  Evangelist Dorinda Clark-Cole.  She is a two-time Grammy award-winning singer of the famous Clark Sisters as well as several solo projects. She tends to navigate a full schedule as host of the Gospel According to Dorinda on the Word network, a syndicated radio show titled Dorinda Clark-Cole Radio Show in addition to two other shows,  Celebrate Live and the Dorinda Show.   This highly respected C.O.G.I.C. preacher travels the country preaching, performs as a gospel artist and owns her own clothing line. With very little time for anything extra, Evangelist Dorinda’s primary goal is to invest more time in herself and relationship with her daughter.

If you are looking for ministry, politics and drama The Preachers of Detroit will not disappoint. The series will introduce a new group of Preachers who have experienced various roads of transformation while sharing a united commitment to help bring about positive change in Detroit. You can catch it all beginning with the series premiere February 20th at 8PM on the Oxygen network. Viewers will get an inside window into the lives of these seven preachers as they deal with personal challenges as well as triumphs while functioning in their roles as community leaders.