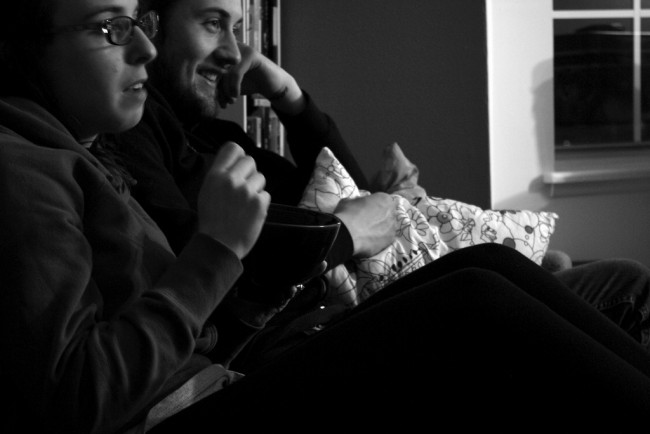 With the kids asleep, finally mom and dad can speak freely, except in front of the TV! Samsung’s new TV captures what owners say in order to enable voice commands. Not only does it pickup what is intended as a command for the TV, but it picks up casual conversation as well. This ability, couched as a “feature,” makes for questionable privacy practices with Samsung’s SmartTV.

The data collected is sent to a third party to create voice commands. Samsung claims no responsibility for the unnamed third party’s security practices and states that in the accompanying manual.

The information is all right there in the fine print. Stated clearly, “Please be aware that if your spoken words include personal or other sensitive information, that information will be among the data captured and transmitted to a third party through your use of Voice Recognition.”

Not so with the SmartTV. The owner must be aware of the microphone icon to either speak freely or monitor what is being said in front of their TV. When in one’s own home the sense of privacy is not questioned, could even be said that privacy is assume and conversations carried on with a TV in the room, SmartTV or not, are often candid.

The idea of this has so many implications. What would be recorded when having company could be anyone’s guess. Consider a visit from the gossiping neighbor or the crazy uncle. The unintended consequences are astronomical and range between rather embarrassing to potentially harmful.

Disconnecting from the recording part of the feature is one possibility, but Samsung says that text and other usage data will be collected in order to evaluate and improve performance. Still the owner can change their settings and disable the whole thing, but then may not be able use voice recognition commands. The owner would once again have to rely on the remote control the TV.

Khaliah Barnes who studies privacy issues for the Electronic Privacy Information Center said that “you should be able to watch your TV without your TV watching you.” Additionally, the FTC released a report in January called The Internet of Things. This report addresses not only privacy, but security concerns in today’s world including devices such as smart locks, smart meters, as well as the newer TVs. While it identifies many benefits, it also points out the risk of having these devices in the home that gather personal data.

Issues of questionable privacy while in the living room chatting in front of the SmartTV could be as simple as something embarrassing being recorded. Yet, the FTC report cautioned that unauthorized persons could exploit weaknesses and that could lead to identity theft or fraud.