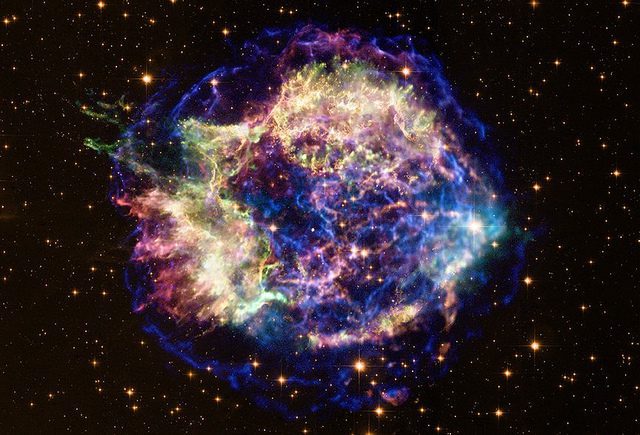 Supernovae are rare in occurrence, but at the center of an enigmatic nebula lie two stars that astronomers say will eventually end in a fiery, violent supernova. Astronomers believe that the two stars are set in such a tight orbit that they will merge and cause each other’s explosion and death. The pair discovered in the binary system are white dwarf stars. They are also the heaviest and densest ever discovered.

To create a supernova, a white dwarf star must use its intense gravity to gain mass from matter around it like another star in a twin star system. By fusing more matter into the white dwarf star it will hold so much mass that the core will collapse on itself due to its mass or explode its inner matter into space.

When the core of a star collapses, the gravity from the massive star squeezes its core matter in so tight that the atoms cannot fuse anymore due to the spaces between the nuclei the of atoms. It then ignites the one of the most powerful explosions known in the Universe creating a luminosity of thousands of suns. This twin system of potential supernovae is the first discovered of its kind.

Henize 2-428, a nebula located near the twin system, has an irregular shape. According to astronomers, the irregularity is caused by the presence of the twin stars. It is a giant cloud of heavy elements like iron and nickel in a gaseous form when its stars initially perished and formed white dwarfs. This discovery was published in the journal Nature after the twin system was observed by astronomers at the Very Large Telescope located in the Atacama Desert in the high mountains of Chile.

Dr. Henri Boffin, a co-author of the paper and astronomer for the European Southern Observatory (ESO), stated that he and his team were looking for a single dwarf star, but astoundingly found a twin star system at the center of the irregular, glowing nebula. The study’s original purpose was to locate and analyze the cause of irregularly-shaped planetary nebulae. Boffin stated the official name for the cause of irregularity is a double-degenerate twin star core. Nonetheless, he said that this observation is truly revolutionary.

Astronomers stated that both white dwarfs are as heavy as the Sun and orbit around each other in just 4.2 hours. Based on Einstein’s theory of general relativity the stars will continue to spiral into each other from orbital decay, thus losing their respective gravitational forces and fusing into one star. Afterwards, the single white dwarf will weigh 1.8 solar masses.

Boffin, along with the other authors of the publication, stated that the supernova is expected to explode about 700 million years from now. They also call this type of supernova “type la”. This is attributed to types of supernovae that are caused by a binary system of white dwarfs that end in nuclear fusion.

Dr. David Jones, a researcher at ESO explained that this type of supernova was previously only theoretical. Even though this nebula is located 4,000 light-years from Earth, it will be able to be seen in broad daylight. Although the twin star supernova will be truly astonishing to view, it will be unlikely that humans will see it as it is eons in the future.