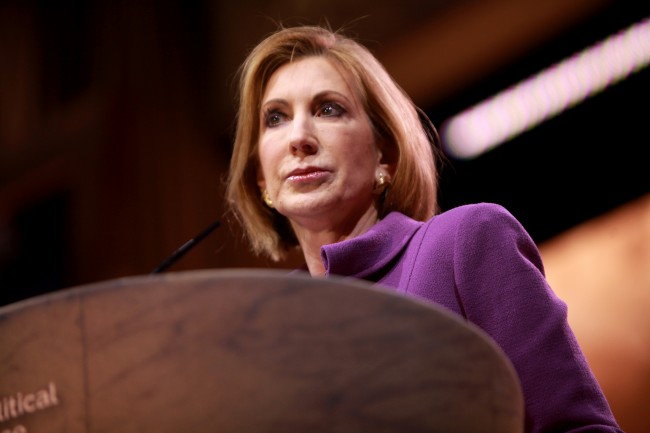 Carly Fiorina, former Hewlett-Packard CEO, said it is highly likely that she will run for the GOP Republican candidacy for president in 2016. She is planning to announce her candidacy in late April or early May.

Fiorina has said that President Obama cannot take credit for the economic boost. However, she did not explain what did prompt the economic boost. It is her executive experience that will separate her from the other GOP Republicans. Voters are looking for a President that has a strong executive background. She has a deeper understanding of the economy and how it works. She started out as a secretary and climbed the ladder to executive of the largest technology company in the world.

Fiorina also has a strong understanding of technology, how to deal with bureaucracy and world leaders. All things that make her a stronger candidate than most. She can also hold her own. Chris Wallace on Fox News Sunday challenged her tenure at HP. He said she would be looked at as a multi-millionaire with no emotions. He brought up that she laid off 30,000 employees and replaced some of them with workers in India and China. Fiorina also received tens of millions of dollars in a payout after the company ousted her. Her response to Chris Wallace was that he must have had the Democratic talking points. She said it was not all American jobs that were lost and laying people off was a last resort. She said it was a terrible thing to have to do. She also claimed that she was managing the company in the worst technology recession in 25 years. She had to make tough calls for the overall well-being of the company. When it was over, a company that was desperately struggling had become an extreme success and jobs grew overall.

She believes that her executive skills make her chances of winning the GOP Republican presidential nomination are “very high.” Fiorina has reliable relationships with many world leaders. She also has a strong grasp on executive decision-making and can turn around large bureaucracies that are struggling. Fiorina believes the government has people tangled up in governmental dependence and cannot break free. The government is also “crushing small businesses.” The government has to make small and family owned businesses strong and help them to grow in order to support the middle class.

Right now, Texas Republican Senator Ted Cruz in the only strong candidate so far to declare his candidacy. Kentucky Senator Rand Paul, and Florida Senator Marco Rubio will be seeking to declare their candidacies next month. HuffPost Pollster says 3.2 percent of the voters will support Fiorina in the GOP primary.