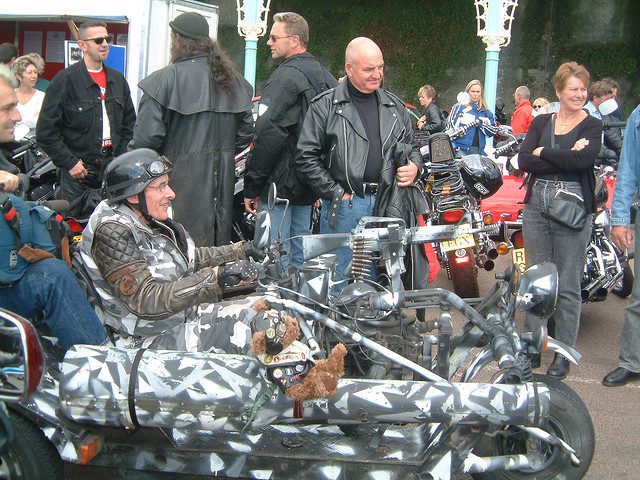 William Shakespeare’s plays have been made into movies a great many times since film was invented. There have been classic films such as Hamlet with Mel Gibson, and there have been modernized stories such as the 1996 film Romeo and Juliet with Leonardo DiCaprio. Both types have had mixed reviews over the years. With the most recent adaptation of a Shakespeare play, Cymbeline, the play translates well to film. Combining a Victorian play with Sons of Anarchy, Cymbeline becomes a Shakespearean story with motorcycles.

The film is written and directed by Michael Almereyda, using Shakespeare’s play as a guideline. It stars the 50 Shades of Grey star Dakota Johnson as Imogen and Gossip Girl alum Penn Badgley as Posthumus, Cymbeline is a love story at heart. The title character Cymbeline played by the aging Ed Harris, is essentially king of the criminal world, leader of the motorcycle gang The Britons. He is also Imogen’s father. The local police are referred to as The Romans, with their leader being named Caius Lucius.

The film begins with some pre-title text to give the viewer background on characters, and the primary conflict of the story. Before the first scene appears with Imogen meeting the penniless Posthumus in secret behind some bleacher stands, a classic piece of advice appears on screen. The advice is as much for the viewer as it is for the characters, “Keep your head.” Imogen (referred to as a princess) is in love with Posthumus, but her father Cymbeline, does not approve of the relationship. He hopes that Imogen will come to marry his stepson Cloten, who is played beautifully by the young acting veteran Anton Yelchin.

Though Cymbeline is a villainous character, the true antagonists of the film are Cymbeline’s wife known only as The Queen, and Ethan Hawke’s character Iachimo. The Shakespearean motorcycle gang comes off as being just and civilized, compared to The Queen and Iachimo. The Queen wants nothing more than for her son Cloten to bed and marry Imogen, thereby solidifying her place of power. As Imogen tells her father, however, she could never love Cloten in that way because they were raised as each other’s playmates. Alas, true love cannot be manufactured.

Imogen, after being found behind the bleachers with Posthumus, is placed in captivity by her father, or in modern terms she gets grounded to her house, unable to leave. Though Imogen and Posthumus had secretly wed, Cymbeline banishes Posthumus under threat of death, threatening to blow his head off with a pistol, though in the film they still call them swords. Posthumus takes up residence with a friend named Philario, where he runs into someone he has had a problem with in the past, named Iachimo. Iachimo’s ego gets the best of him by calling out Posthumus, that his wife Imogen is as much of a whore as could be found, snorting meth in a club.

Gravely insulted by this, Posthumus bets Iachimo that he could never persuade Imogen to sleep with him, and Iachimo accepts. Posthumus’s wedding ring is put up against Iachimo’s $10,000. Iachimo ends up winning, though how he wins will only be revealed by watching the film. A great many more dramatic and quite shocking scenes fill the second half of Cymbeline. As far as movies go, this modernized version of Shakespeare’s final play is worth watching. The only real problem with Cymbeline is that the characters are not always transparent in who they are or what they do. Towards the finale of the film one might find themselves questioning what is going on. In fact, it is safe to say, it is a good idea to check out a character list to figure out what is going on towards the third quarter of the film.

While Cymbeline is not as compelling a tale as Romeo and Juliet, or Hamlet or even Macbeth, it is still a film worth watching. Especially for those who are fans of Sons of Anarchy. That is what this Shakespeare play on motorcycles tries to accomplish in Cymbeline, but falls short in terms of suspense. Getting past, or enjoying the old English style will be easy for some, but hard for others. Due to this and the other reasons mentioned, Cymbeline gets a six and a half out of ten.

One Response to "Cymbeline, Shakespeare on Motorcycles (Movie Review)"