By Benjamin Johnson on March 3, 2015Comments Off on Judo Federation Bans Members From Teaching MMA 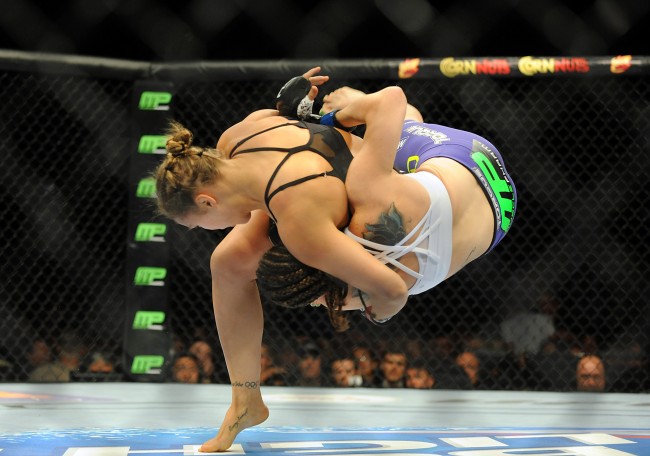 The French Judo Federation has issued a statement banning members from teaching MMA. Over the past several days, the president of the French Judo Federation, Jean-Luc Rouge, has banned any judo coach or competitor from teaching any form of MMA. Currently, the sport of MMA is illegal in the country of France due to being considered a blood sport; much like bare-knuckle boxing is in many other countries. In such countries, where bare-knuckle boxing is illegal, yet still performed in underground fighting circles, MMA as a whole is perfectly legal and recognized as a legitimate sport.

Before she was a UFC champion, Ronda Rousey was a professionally trained Judo World Champion, as was her mother before her. This statement has caused both Ronda Rousey and her mother, Dr. AnnMaria De Mars, to speak out against this decision by the French Judo Federation. Taking to Twitter, Dr. Ann Maria says “Ridiculous, keep it up and they’ll have to change the name from IJF (International Judo Federation) to WTF.” Her daughter has backed her up stating, “The IJF isn’t Judo. The judoka are the soul of the art, not the bureaucrats.” Harsh words coming from two influential IJF World Champions.

Jean-Luc Rouge stated in an interview with French magazine L ‘Equipe, “Anyone caught teaching MMA (Mixed martial arts), will be removed from the French Judo Federation. MMA is illegal in France. All those who teach do not have the right and are liable to be written off. They put the Federation in trouble and if there is serious injury, it will be my fault.” He went on to say that “These new combat sports (MMA) seem like they come out of a video game. These guys are stupid enough to kill each other in front of everyone in a cage and they are well paid, so they would accept. Sport is not war! We must be able to shake hands and go have a beer together in the end.” Therefore, it is not just one man who is taking a qualm with MMA, but the Judo Federation itself is banning its members from teaching MMA. Quite a statement considering that Rouge’s federation has over 500,000 members in France. This statement only further hinders Mixed Martial Arts to be made legal in France, due to the amount of members who are sure to follow Jean-Luc Rouge’s ultimatum.

While Mixed Martial Arts is considered by many to not be a sport, but a modern-day gladiator event with its fighters putting their lives on the line, this reporter has seen it evolve from the beginning. As a child many current fans found the UFC to be highly entertaining. While those early events had no weight classes and considerably fewer rules, the spectacle has evolved into a world recognized sport. This makes the Judo Federation banning its members from teaching MMA seem prejudiced. No longer will a 300-pound Karate black belt be seen headbutting a 150-pound kick boxer to a bloody finish. No longer can a fighter knee a downed opponent in the head, and other such rules have been put in place making these techniques illegal. France needs to get with the program and evolve their standards as to what is barbaric, and what is simply good entertainment.