Rihanna Makes Sure She Is Paid 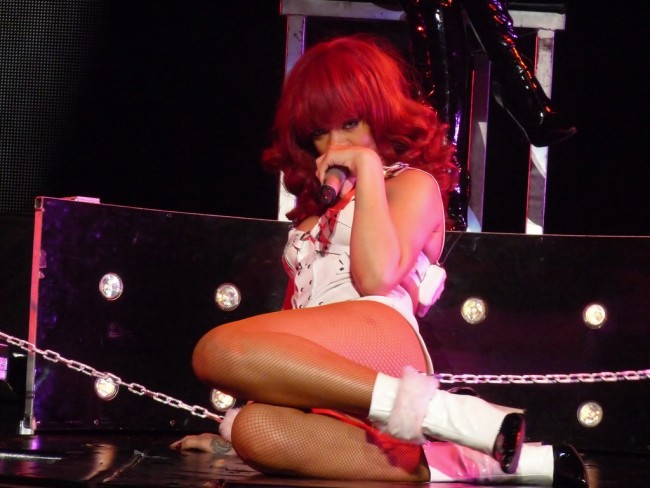 Rihanna has never left the scene, whether she is making a fashion statement, making surprise appearances in films, or releasing sizzling singles off her latest album. Throughout her entire career, she has changed her style many times to reflect how different she is each time a new album or single is released. Though, even with all of these changes, Rihanna makes sure she is still paid for her labors.

The singer has a point in the statement she is making in her new single, B**ch Better Have My Money, because money is rolling into her bank account. Since her first single, FourFiveSeconds, with featured artists Kanye West and Paul MCartney off the album R8, fans are eager for the entire album to drop. She has recently achieved a triple threat title by releasing a new track on Thursday, turning heads with a high-brow statement to attract the fashion world. As well, she is having a movie released with her lead voice-over role in the 3D animated movie Home, hitting theaters March 27. No part of the entertainment world is neglected by Rihanna.

In fashion and beauty, Rihanna is looked upon as a trendsetter. According to Refinery29, the artist is not afraid to take chances on her appearance. She is known for setting trends. The artist has been seen wearing styles of Fall 2015 fashion, days before it was released on the runway. As stated by Style.com, she was seen in several designer outfits from Alexander Wang, Adam Selman, who is known to be her costumer, Chanel, Julia Seemann, Parisan Brand Parscal Millets, and Holly Fulton. She has worn many of the outfits to fashion shows, opening nights, and conferences. Rihanna makes sure she is paid by having the ability to know many sources, allowing her to prepare others that want her style, and to know what to expect in the following seasons.

With eight albums recorded, and one currently on the way, while being a fashion icon and statement, the artist has also been able to make guest appearances in many films. She began her guest appearances in 2006, when her first album was released on the soundtrack of the film, Bring It On: All or Nothing. Rihanna is acting as herself in the movie as a celebrity judge during the grand finale cheerleader showdown. Her latest glimpse was in the 2013 blockbuster film This Is The End. The character she plays slaps Michael Cera in the face when he grabs her posterior. The animated film Home, which is currently in theaters, marks Rihanna as the first African-American woman to have a voice over lead role in a 3D animation motion picture.

Rihanna told Good Morning America in an interview how she was trying to give the character in Home a bit of her sweet, sassy, and innocent personality, so fans would be able to connect with her. Rihanna has begun to lock down the entertainment world and the 27-year-old still has a lot to accomplish if she continues down the path she is on. With a rumored tour of her and Kanye West taking place this year, Rihanna has a very exciting year set before her.

Rihanna makes sure she is paid by networking with all of the right people and not letting anyone hold her back. With a new movie, album, and tour set forth, who knows what her fans should expect next.