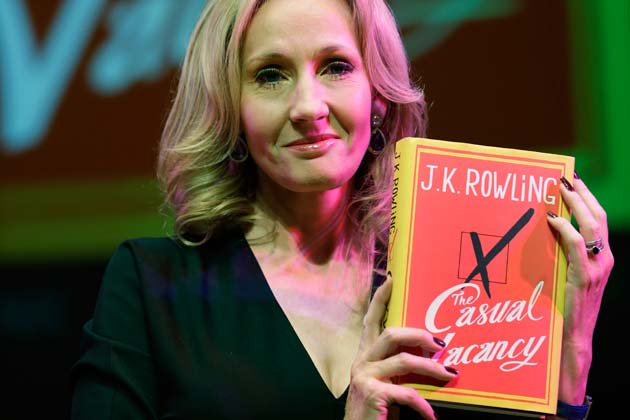 It has been four years since the last Harry Potter movie was released. However, J.K. Rowling fans not content to just read her newer material, under her own name or her Robert Galbraith pseudonym, will be excited to know her work is returning to the screen shortly. Rowling’s first novel officially for adults The Casual Vacancy will be an HBO miniseries airing in April.

The first trailers for The Casual Vacancy have begun appearing, whetting fans’ appetites. The three-part mini-series, which aired in the United Kingdom last month, will air in the U.S. starting on April 29, with two parts playing that night and the third the following evening.

Besides being written for grown-ups, who admittedly read her earlier works, Rowling’s 2012 novel has been called a “parable of national politics,” touching on themes about class, politics, welfare, drug use, prostitution and rape – not that Death eaters were light stuff either.

One of the main characters in the miniseries will also seem familiar to Harry Potter fans. In the book, the character – Howard Mollison – and his family are reminiscent of the Dursleys in obnoxiousness and dysfunctionality. The casting will either please or confuse Potter fans; Michael Gambon, who played Dumbledore for the last five films in the magical series, portrays Mollison.

The story is set in a fictional West Country English town named Pagford. The novel and conflicts begin with the sudden death of a beloved local politician, Parish Councilor Barry Fairbrother. The drama ensues as the lead up to the inevitable special election to fill the vacancy created by his death becomes the catalyst for family, social and class issues to bubble over. Once the townsfolk’s darkest secrets are revealed online, the campaign and those involved within the community are left dealing with the mangled relationships and uncertain future of the town.

Those who were unhappy with the books ending (as well as those who were satisfied) should be aware that the HBO version of The Casual Vacancy reportedly does not stick tightly to the book. “I was very straight with Jo [Rowling] and told her that I needed to write a different ending,” the miniseries’ screenwriter Sarah Phelps warned British media before it aired overseas. The former EastEnders writer reported that the plot is “still heartbreaking, but I had to find some kind of redemptive moment at the end of it all, that sense that after the tragedy, someone gets to stand with a slightly straighter back.” So, creative liberties were taken in the name of good television drama.

The Casual Vacancy may be airing in April on HBO, but it is not the only post-Potter J.K. Rowling hitting the small screen. The BBC has announced that they are working on a television adaptation of The Cuckoo’s Calling, one of the detective novels the author wrote under the Galbraith name. Those books feature a downtrodden private eye named Cormoran Strike, who is a war veteran and amputee, and his would-be assistant Robin. The project is still in development and casting or expected air dates have yet to be announced.