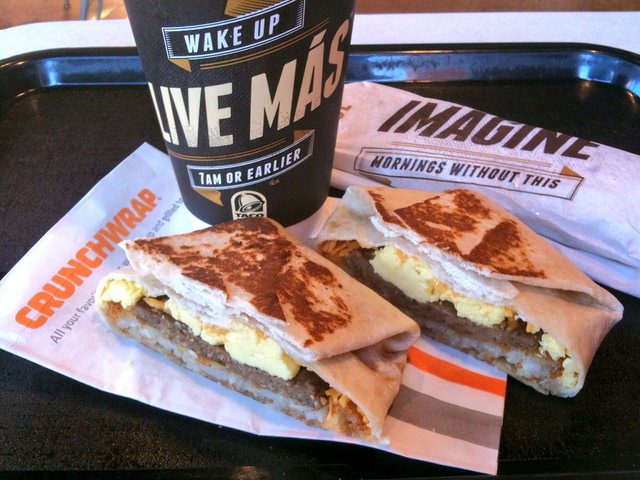 Around a year ago, Taco Bell added something new for intestinal distress seeking consumers all across the nation to choose from: a breakfast menu. The selection on the menu that wound up being the most infamous was the waffle taco, a wrap akin to the griddle cake-style breakfast sandwiches now ubiquitous in many fast food restaurants in taco form, with sausage, egg and cheese in a waffle shell, complete with maple syrup to drizzle it in. While the exact reason remains unclear (perhaps everyone was too grossed out by it), the Bell has decided to retire the waffle taco. In place of the waffle taco, Taco Bell has expanded their breakfast menu by adding a chicken biscuit “taco.”

With a cup of “jalapeno honey” (well that sounds….strange and unusual) on the side for drizzling, the new invention will be available nationwide on March 26th. In addition to the Cap’n Crunch Delights, donut holes filled with creamy milk icing that are covered in Cap’n Crunch Berry crumbs, that are being tested at numerous stores around the nation to surprisingly good results, Taco Bell has made it quite clear that they want a fair share of the breakfast market. As 2014 came to a close, the Americanized Mexican fast food chain reported that breakfast accounted for six percent of their sales. For 2015, they seek to increase their breakfast sales to 20 percent by the end of the year.

As with last year, Taco Bell has been promoting their expanded breakfast menu with ad campaigns and commercials that go after McDonald’s. The difference being that last year there was at least some degree of subtlety, with commercials involving people who all just so happened to be named “Ronald McDonald,” praising their love for their breakfast menu over the one at Mickey D’s. This year, well, it appears that all of their tact has walked out the front door.

Apparently, in order to prove how much better their breakfast is than McDonald’s, Taco Bell has taken the route of satirizing dystopian films such as 1984 and The Hunger Games. Only the Big Brother/President Snow figure is a man dressed in clown makeup with a not-so-subtle resemblance to Ronald McDonald. If all this needs to be done in order to draw people to Taco Bell for breakfast, one has to wonder if their breakfast offerings are even all that good. Of course, competition is a recurring theme in the fast food business, but most tend to take a much less blunt and more indirect route with it. With the exception of Quizno’s who gained notoriety in the mid-2000s for several ads which took direct aim at Subway. Flash forward to 2015, and Subway is still going strong, while Quizno’s has virtually disappeared off the face of the Earth.

Taco Bell has taken a rather interesting approach to the marketing of their expanded breakfast menu. Perhaps the drastic moves are necessary, as 6 percent of all restaurant sales is a lackluster number in comparison to the 25 percent enjoyed by McDonald’s. As Taco Bell puts McDonald’s on blast for their “sameness” in their commercial, they must be doing something right in order to remain so consistently popular. Maybe Taco Bell should sit down and learn a lesson or two from them instead: