‘The Walking Dead’: ‘Conquer’ or Be Conquered [Recap & Review] 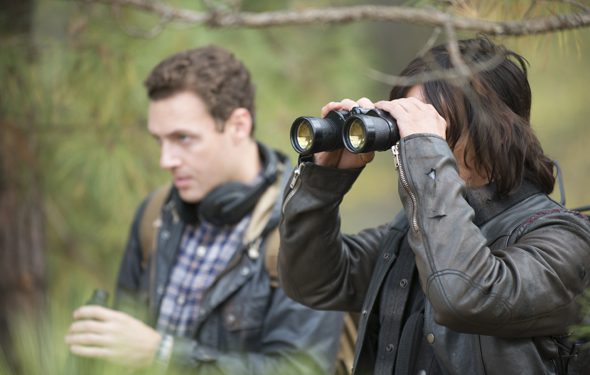 The Walking Dead season 5 finale was finally here, in an episode called Conquer. In the 90-minute-long episode, Morgan was in the opening scenes, and viewers found out what the W’s carved into the foreheads of some of the walkers referred to. Also, Rick Grimes showed his leadership qualities in the finale.

There were so many highlights during The Walking Dead, that this recap might leave some out, just due to space and recording considerations. The episode began with a scene of a derelict car, and Morgan inside of it, waking up. He cooked breakfast, and was joined by someone with a gun, who told him when they first settled there, a bounty was put on wolves’ heads.

The man was clearly up to no good. He had a gun with him, and told Morgan “I want it,” referring to the mug he was drinking from. The man said “I’m taking you, too, and you won’t exactly be alive.”

“Don’t move. Just be still,” the man said. Another man came out of the woods to attack Morgan. Morgan told them they should go, but they did not, and he beat them up with a stick he had. A walker came out of the woods with a “W’ carved into its forehead. The “W” on the foreheads of the walkers was meant to stand for “Wolves.” Then, The Walking Dead went to its first commercial break.

Carol, Glenn and Sergeant Abraham Ford showed up to talk to Rick on The Walking Dead. Carol told Rick what to say when he gets asked about taking a gun from the armory. Carol said “We’ll tell them stories. That’s what children like to hear.”

Even without guns, Carol said that they could take over if things went bad at the meeting that night. “We still have knives,” Carol said. “That’s all we’ll need against them.”

Daryl and Aaron talked together. Daryl asked Aaron what happened when the three people were sent away. Aaron told Daryl “We drove them out, far, gave them a day’s worth of food and water, and just left them.”

Carol and Rick talked. Rick asked her “Why didn’t you want to tell them we had more guns?”

“I didn’t want to tell them about the guns just in case,” Carol answered him. Then, The Walking Dead went to yet another commercial break.

After The Walking Dead returned, Daryl and Aaron looked at a man wearing a red poncho through binoculars. The man was rubbing leaves on himself. “What’s he doing?” Aaron asked. Daryl told him that the man knew how to keep mosquitoes of of himself.

Rick walked out of the building he had been kept in. Maggie talked with Glenn, saying she was going to talk with everyone she could to try to work something out.

Father Gabriel was let outside of the walls. He said “I just am taking a quick walk. The Word of God is all I need for protection.”

Aaron and Daryl talked about “needing more good people. We’ll find them,” Aaron said. It looked like they were at a trucking company. They tried to get inside of some of the trucks. Daryl was suspicious.

Several doors of the trucks opened at the same time, and walkers poured out. Daryl and Arron crawled under a truck, with the walkers trying to get at them. They emerged from the other side. Aaron and Daryl got in a car, but there were walkers all around them, as The Walking Dead headed to another commercial break.

When The Walking Dead returned, Carol went over to talk to Pete. “Get out!” he told her. Carol pulled out her knife, and threatened Pete, saying she could kill him.

Carol said “The way this has played out, you have a chance. You are a small, weak nothing, and with the world how it is, you’re even weaker. Play your cards right, and you might not even die. I want my dish back, clean, when you’re done.”

Outside of the Alexandria Safe Zone, Glenn was walking and saw some walkers. He got shot by Nicholas, who looked around him to see if anyone had witnessed what had happened.

Then, on The Walking Dead, back where Aaron and Daryl were trapped, Daryl said “I feel all closed-up right now.” They talked about a plan to escape.

“Alright,” Daryl said. “Ready?” They were going to go on the count of “three,” but then Morgan showed up, and helped them.

Morgan said “Because all life is precious, Daryl.” Aaron invited Morgan to come back with them.

Then, when The Walking Dead came back, Father Gabriel was still waiting. He had a rope and noose with him. He placed it around the neck of the walker, and pulled tight, until the head came off.

Nicholas shot a walker with his gun, then Glenn attacked Nicholas. Walkers approached, and Nicholas got off of him, to let the walkers finish Glenn off.

Rick and Michonne talked, and Rick told her that they worked it out about taking the guns. “We lied to you,” he told her.

“Did you think I would try to stop you?” she said, handing him a gun.

Michonne told Rick “I think we can find a way. I think you can find a way. And, if we don’t, I’m still with you. Something’s going to happen, just don’t make something happen.”

A bit later, Rick looked out of his window, and hurried outside. He saw the gates were open, and he shut them; but, probably too late. The Wolves and/or walkers might have already gotten inside.

As The Walking Dead returned, Rick was running, and searching. Sasha went to ask Father Gabriel for advice. “Can you help me?” She asked.

Then, Deanna held the meeting. “We’re going to talk about what happened, about our constable, Rick Grimes. I was hoping that he’d be here.”

“I’m sure that he’s coming, and that we can work this all out,” Maggie said.

“Why wouldn’t you want to die? You don’t deserve to be here,” Gabriel said. He talked about “your sins,” to her, and said that her brother deserved to be there, “but you don’t.”

Rick saw a walker, and took it out. Then he saw others, and did the same.

Sasha and Father Gabriel had a fight. Glenn took out the walkers that were after him.

Michonne and Carol both talked in favor of Rick Grimes, and how he had saved their lives, over and over. One walker was close to Rick’s throat, but he strangled it until the walker’s eyes popped out.

At the meeting, others spoke up for Rick, like Sergeant Abraham Ford and Maggie. Daryl and Aaron came across the man they had seen through their binoculars, and slit his throat, as The Walking Dead went to another commercial break.

Maggie said “My father respected Rick Grimes. He did the things he had to do. We’re family now, Rick started it, and you can’t stop it. And, you don’t want to. That’s family, and you want to be a part of it, too.”

Deanna said “I want to say something in the spirit of transparency.” She told everyone about what Father Gabriel had said.

“I was scared!” Nicholas kept saying. Glenn told him “Shut up.”

Maggie walked in to where Sashsa had Gabriel at the point of her gun. “You should have let her,” he said. “They all died because of me,” he said, sobbing.

Rick said “There wasn’t a guard at the gate. It was open.”

“But, we’ll kill them. We will survive. I’ll show you how,” he said. “I was thinking, how many of you do I have to kill to save your lives? But, I’m not going to do that. I’m going to save your lives. You’re not ready, but you will be.”

Peter said “You’re not one of us!” He stabbed Deanna’s husband’s, Reg’s, throat. “Rick,” she said “Do it!” Rick shot Pete and killed him.

Morgan then showed up, and said “Rick.” That was the end of the fifth season finale of The Walking Dead, other than a brief scene showing Michonne taking the katana off of the wall where she had hung it.

Wow, what a great season finale of The Walking Dead! Glenn and Nicholas had a showdown, of sorts; Daryl and Aaron were trapped in a trap set by The Wolves, but Morgan showed up in the nick of time and helped them escape; Deanna held a meeting to determine Rick’s fate, but ended up on Rick’s side when he showed up with the walker, and Peter attacked and killed her husband. She gave Rick permission to kill Peter, which he gladly did.