Video Games: A Child’s Toy or an Adult’s Recreation? 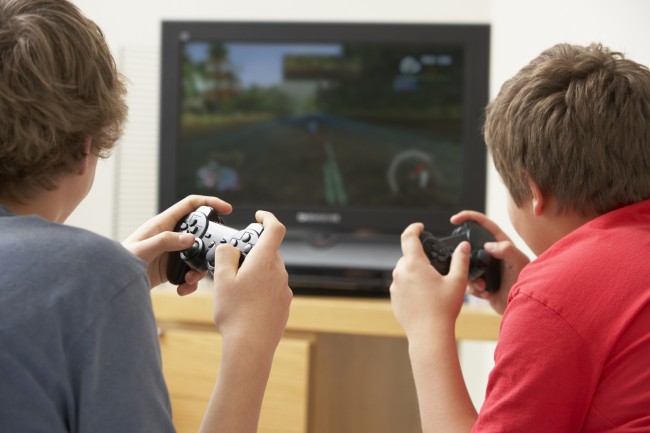 The general consensus in the health world used to be that video games are for kids. Nowadays, however, many children who used to play their Super Nintendos and Segas have grown up. Now, the question becomes: are video games merely a child’s toy or are they a recreational outlet for adults as well?

As a child, kids chose between a Sega Genesis, Super Nintendo, or their parent’s old Atari system. It was a favorite toy for a number of reasons: it was a group activity, more entertaining than just watching TV, and was a perfect activity for a heavy kid growing up. What better way to spend an afternoon for a chubby kid than sitting, laughing, and connecting with kids of all shapes and sizes with video games? Back then, most games were what are currently known as “side-scrollers.” Some examples of these games are Super Mario Brothers, Super Ghosts and Goblins, and Boogeyman. Essentially, all the action on the screen consisted of jumping, and going from right to left repeatedly on the screen. In most games, jumping on the enemy or throwing something at it is how they were defeated.

Some kids would take winning and losing at video games as seriously as they do any kind of sport. Others never did; it was a game meant to be enjoyed whether or not they won. A lot went into the enjoyment of video games. If graphics were amazing but the game play was not the best, it was still fun to play. Some games became popular simply for the soundtrack, and kids would play the same level multiple times just to hear the music again. Kids would save up their allowance and go to the flea market to buy new games just by sight. Video game reviews were few and far between, and lots of times were bought because the cover or back of the case looked cool. Some of the things children do with their favorite toys, videos, or music is displayed in video games. Playing the same levels over and over again, picking out favorite characters and arguing if someone disagreed, and especially showing off that one person knew how to access the secret level and someone else did not. Many a child’s ego was built or broken depending on if they knew the secrets of the level, and being made fun of for gaming skills or lack there of was common.

As children grew into adults, video games became less a toy and more of a necessary recreational activity to keep their sanity. Getting into fights during school days was something that a child received a slap on the wrist for, maybe even a few “unplanned vacation days” from being suspended. As adults though, hitting someone in the face will land an adult square in jail. While some adults were able to find sports teams to play for, the amount of adult amateur sports leagues are few. Therefore, what is an adult to do other than get wasted? This is where video games come into play. Chances are, most friends have a video game console, if not for themselves, then for their kids. Multi-player matches have evolved so much since the 90’s that one can play video games with anyone around the entire world at any given time. When one thinks about the impact of this, it is quite a feat!

After a stressful day at work, many adults come home not to watch reality TV, but to load up some Call Of Duty multiplayer and kill or be killed hundreds of times from a first-person perspective. While not everyone enjoys the hyper reality of such video games, for many, first-person shooters act as an anger management tool. Some video games are so ridiculously hard, such as FTL or Dark Souls, that it is not uncommon to throw a controller to the ground. Yet, whether a player gets angry because of the video game, or play games because they are angry at real life, it makes more sense to go home and shoot fake soldiers than to pull a Sandy Hook.

Even the number of people who watch others playing video games each year is staggering. An estimated 71 million people watched some form of eSports in 2013, half of which were Americans. Of those 35 million or so Americans, one in every five actually participated in the gaming. These video game competitions are serious business; people even make careers out of it. An event called League Of Legends gave out over $2 million in prize money in 2013. Now, that is something to sink one’s teeth into!

In the end, video games are a form of entertainment that can be enjoyed for a variety of reasons by the young and old alike. No longer are video games only an expensive toy for children or adults, with new games costing as much as $60 each, but they have become an integral part of an adult’s recreation time. Without the fantasy world that video games can offer, there would be a dramatic rise in crime and violent acts. Sometimes, it is good to enjoy the dark side of life, at least when it is not real and no one truly gets hurt.

2 Responses to "Video Games: A Child’s Toy or an Adult’s Recreation?"