3D Robotics: Smart Solo Drone Technologies That Are First of Its Kind 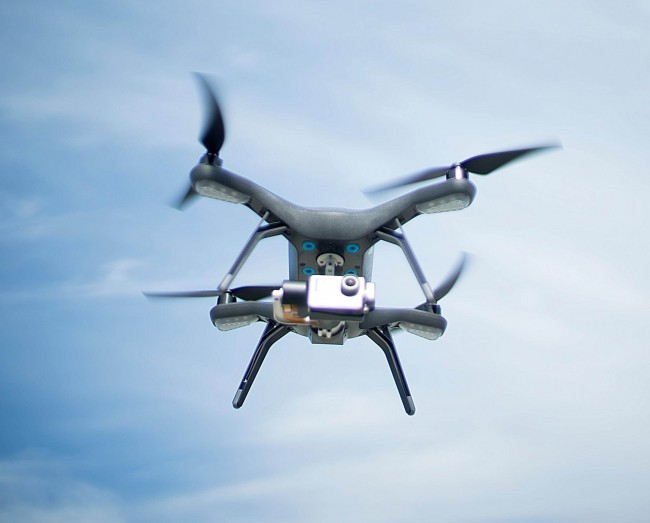 The new 3D Robotics Solo smart drone runs unmanned. It can film movie shots or shoot the world around you. 3D Robotics promises that this drone has technologies that are the first of its kind. The best part is any beginner can learn to use these technologies right away.

The 3D Robotic Solo Drone uses two Linux-based computers, one runs the unmanned flying drone and the other one is the controller. The GoPro camera is sold separately from the drone, however, the software that was designed for the GoPro camera will give the user complete access to the camera’s controls while the drone is in flight. A user will be able to control the camera completely from the ground from stop, start, change the exposure, take pictures, and more.

The pilot does not line up the shot from the ground, the drone will do it on its own. The drone also has automatic landing and takeoff, it can even pause in midair and follow GPS direct flight. The drone will even follow the user for high-definition selfies.

If the Solo goes down and the pilot is unable to locate the drone, the battery can be used to track it to its location. The Smart Solo Battery also lets the pilot know when the batter power is running low.

Consumers will not have to purchase an expensive extension kit for the camera either. The GoPro camera can be attached to the smart drone’s gimbal, which is a “motorized, three-axis camera stabilizer.” The smart drone is compatible with other cameras and mobile devices as well. The GoPro does not need to be permanently attached to the drone. The Solo drone is ready to go straight out of the box. There is about a half a mile signal range on the radio.

GoPro offers the Solo drone’s pilot, the ability to have complete control over the camera while the drone is in-flight. The GoPro camera streams low-latency, live streaming videos to mobile devices. To accomplish this, 3D Robotics actually created a brain for the Solo drone.

The Solo drone showcases two brand new technologies to enable deep integration with GoPro’s technology. Chris Anderson, the CEO and co-founder of 3D Robotics, says these two new technologies are due to the drone’s on-board Linux computers. These computers enable the Solo drone to run apps for tracking objects and artificial intelligence, among other things. The Solo drone also has a broadband connection that has long-distance, enabling the drone to transmit data while in flight, telemetry, as well as the HD video.

The only way to control GoPros camera from the air is through its limited range Wi-Fi. However, the Solo drone’s gimbal plugs into the Hero port on the back of the camera, which is normally used to add a touchscreen or a battery, as well as the Micro-HDMI port. Adding to all this, the camera’s wireless capabilities the pilot may control the camera from half a mile away and stream live HD video. No other consumer drone offers these technologies that are the first of its kind that can only be found with 3D Robotics.