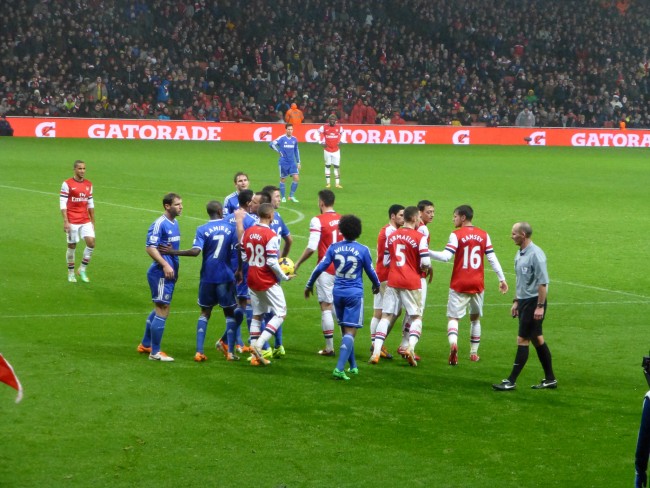 Chelsea FC maintained its 10 point lead in the Barclays Premier League, by drawing their match against Arsenal FC today. The goalless draw at the Emirates Stadium edged the team closer to winning and lifting the trophy, after 10 years without a title. The Blues players celebrated on the field and captain John Terry looked relieved and happy after the match. They all knew that they almost had the cup in hand.

It was a closely contested match, with both sides not willing to give any leeway. When, 16 minutes into the match, Chelsea had an opportunity to score, Arsenal’s goalkeeper David Ospina charged from his goal-line. He missed the ball, and collided with Oscar, the Chelsea midfielder. Chelsea’s claim for a penalty was unheard, and seven minutes later Chelsea midfielder Cesc Fabregas was given a yellow card for simulation. Fabregas went down after Santiago Cazorla, the Arsenal midfielder, dangled his leg. Arsenal got a free-kick. Arsenal too had its chance, when Chelsea defender Gary Cahill blocked a shot with his hand at 34 minutes. Their calls for a penalty went unheeded, but at 68 minutes Chelsea midfielder Willian kicked Arsenal defender Laurent Koscielny on his head when both were trying to hit the ball. Willian was given a yellow card, and Arsenal got a free kick. Both teams had their share of contested and uncontested penalties.

Chelsea manager Jose Mourinho said that they had wanted to win the match, but Arsenal proved to be a better team and thus made it impossible for the match to go in their favor. They played a very defensive game, and ensured themselves against any counterattack by Arsenal. Mourinho has been accused of playing conservatively and was booed by Arsenal fans, who called their gameplay boring. Mourinho said that it was required, and they wanted to play safely. “You support a club and you’re waiting, waiting, waiting for so many years without a Premier League title, so that’s very boring,” Mourinho said in a statement. He mentioned that their game plan had been to be dangerous in the first half, and solid in the second half.

The London Derby also marked Arsenal manager Arsene Wenger’s 10th loss in the league, and 13th loss overall to Mourinho’s team. Their attack was limited, even though they had possession of the ball for 58 percent of the game. They just had one shot on target as opposed to Chelsea’s two, but committed more fouls. This was also the first time since November that Arsenal dropped points at their home field. Wenger said that his team performed as requested, but made some mistakes. He did regret the final few minutes of the match, when they had some missed opportunities. “Chelsea will be champions. We know that. It is impossible to lose it now,” he told the Premier League website.

Chelsea needs only six more points to win the league, and have five more games left to make up the point difference. The team also had another reason to celebrate, as teammate and midfielder Eden Hazard won the Professional Footballers’ Association Player of the Year award today. The 24-year-old midfielder scored 13 goals, and made eight assists in matches during this year’s Premier League.