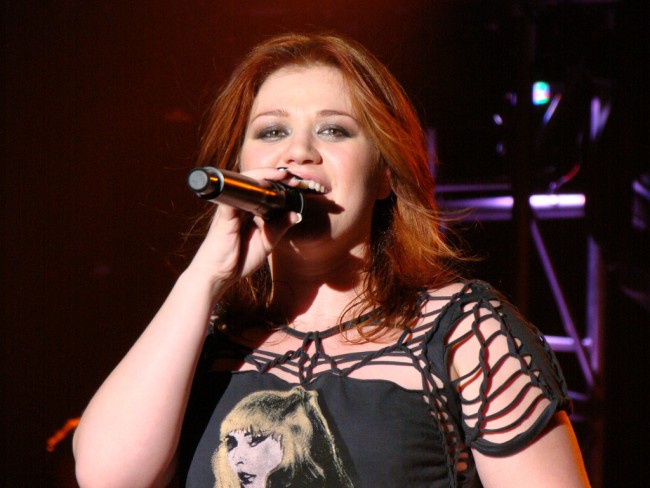 During Mike Gallagher’s radio show on Friday, a comment made by his guest star, Fox News anchor Chris Wallace, regarding Kelly Clarkson’s weight has left people shaking their heads in complete disgust. What began as an innocent conversation between Gallagher and his radio guest concerning the radio host’s weight and a pizza that can be purchased with bacon wrapped around its crust, took a hard left turn. Out of nowhere, Gallagher asked his well-known guest in a very crass-like manner if he had noticed Kelly Clarkson’s substantial weight gain lately.

At first, Wallace responded with taking a playful jab at the conservative host. He then followed that up with a kind compliment about Clarkson’s vocal abilities. With this answer, Wallace left listeners thoroughly impressed by his choice to not engage in the snide remarks against the American Idol winner. Within one second, that all went flying out the window when he opened up his mouth again only to say that Clarkson should be keeping hers closed when deep dish pizzas are within her reach.

The thoughtless comment was enough to cause Greta Van Susteren, a Fox News host as well as Wallace’s colleague, to post on her blog the very same day that he owes Clarkson an apology for the negative words he spoke about her weight over the airwaves. This Sunday morning, Wallace finally did issue that statement, giving his sincere apologies for the offensive remarks that were made two days ago on the Mike Gallagher Show. He also recognized her incredible talents as a music artist and realized any of the comments that were made about her that day should have focused solely on those talents and nothing else.

The American singer, now 32 years old, has been under a lot of scrutiny recently when it comes to her weight. Last year, Clarkson gave birth to a healthy baby girl. Instead of allowing her to peacefully enjoy her new life as a mother with her new baby, people have chosen to make it their business to keep track of the numbers that are showing up on her bathroom scale. Fact is, since her introduction to fame began in 2002 during her journey through American Idol, her waist size has always been a topic up for discussion.

On April 3, the upbeat pop singer made an appearance on the Ellen DeGeneres Show and shared with the audience her struggles that she has faced all throughout her life dealing with her weight. At this point in her life, she is not personally hurt by the negative comments towards her size, but rather, she is finding herself hurting for her fans that are being exposed to all the negative side remarks concerning her size, because whether or not it is being admitted, everyone at some point will compare themselves to the people they admire or to the people they see every day on their television screens and in the magazines they read. In the end, Clarkson’s bottom line is just to learn how to love and appreciate the person within, because it is the only person who is impossible to hide from.