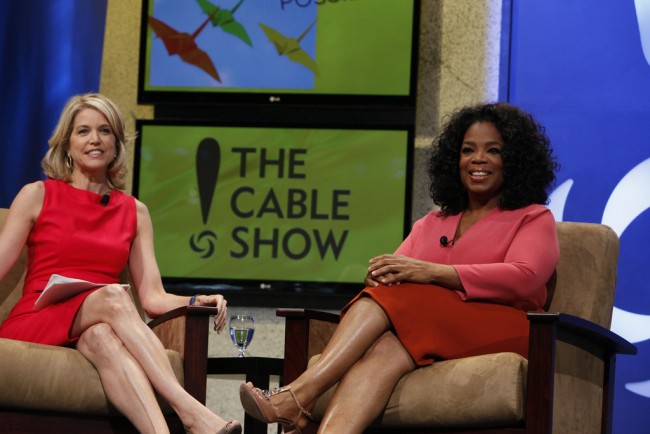 Oprah Winfrey was giving away stuff. It was not on her show and it was not cruise to Hawaii or a flat-screen television. Instead the talk show host decided to auction all of her art and some household items from her Water Tower Place condo in Chicago. While the decision was made earlier this month, the auction took place on April 24. The proceeds, which amounted to nearly $800,000, will go towards her Leadership Academy for Girls in South Africa which runs schools for disadvanteged girls. The unlikely highlight of Oprah’s auction, turned out to be an ordinary paper wastebasket which fans bought for $313.

Amidst all the glassware, crockery, exercise equipment, Oprah’s sunglasses and pens, dog figurines and designer clothing, the basket might have felt lost until someone decided to pay more than 50 times its value and purchase it. The 500 odd knickknacks were priced from $30 to $120,000. Leslie Hindman Auctioneers started the preview of the exhibit on April 16 and said later that many of the products were sold above the estimated price. Three candlesticks sold for $1200 but had been priced between $300 to $500. Oprah’s weight set went for $1,188 while an 18 carat enameled ballpen went for $1,125. One of the dinner sets went for $20,000 while a painting by Richard Edward Miller priced at $120,000 remained unsold.

Fans drove down to Chicago to buy their personal Oprah goodies. About a 100 people showed up in person, according to the Chicagoist. Another 500 people joined in online to bud remotely. The Chicagoist writer was left wondering what someone would do with a $313 wastebasket, but joked that Oprah fans could probably throw diamonds in it. A Twitter user tweeted the picture of an etching she got and then placed on her wall thanking the auction house while another rejoiced at getting her first item by bidding online.

Why did Oprah fans pay more for the memorabilia than the item’s worth? Jessica McCarihan told the Chicago Sun Times that she just wanted a glimpse into Oprah’s life. Another person in attendance was Daron Poage. He paid $12,500 for three sets of dinner and salad plates by Royal Copenhagen Flora Danica and told the paper that it was a great product. “Of course it is. It’s Oprah’s,” he added.

Celebrity fans have been known to be rather “eccentric.” Remember Britney Spear’s used chewing gum in 2004, Scarlett Johansson’s used tissue in 2008 and One Directioner Niall Horan’s half eaten toast in 2012? All of these products were auctioned on eBay for a large amounts of money. Research has in fact proven that fans pay more at auctions if they believe that a celebrity has touched the item at some point.

Yale University psychologists Paul Bloom and George Newman carried out a study where they asked 435 volunteers how much they would pay for a sweater that had once been owned by their favorite celebrity. The group was then divided and some were told that the sweater once purchased could not be returned. Another group was told that it had since been sterilized while yet another was told that the sweater had been touched by other people since. Their research, which was published in 2011 in the Journal of Consumer Research, found that people were willing to pay more for the sweater even after it had been handled by someone else or even if they could not return it.

The Chicagoist author ended his piece by thanking everyone who had “entirely too much money” but donated it to a good cause. While some people criticized the prices and some made lists of items that were actually affordable. Following the Yale duo’s findings, though, it is but obvious that authentic Oprah merchandize would be valued higher at auctions by fans, including the $312 wastebasket. Oprah’s auction follows her news from earlier this month, that she is going to shut down Harpo Studios, her Chicago production house by the end of this year. Oprah also decided to move to Hollywood with the Oprah Winfrey Network as she wanted to focus more on her network. A Chicago institution for the past 26 years, Oprah’s move has been met with mixed reactions.

One Response to "Oprah Winfrey Fans Pay $313 for Wastebasket"