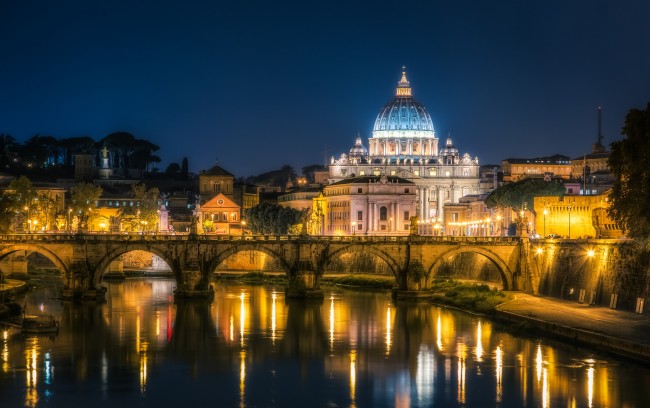 A group of eighteen Islamic extremists, allegedly motivated by the Al Qaeda, were arrested on Friday by the Italian police in an effort to stop an attack on Vatican City. According to police, each arrested individual was either Pakistani or Afghani. Wiretaps were able to prove that Vatican City was at an extremely high risk for an impending attack by all eighteen persons that were seized by police.

This is not the first attempt that has been made to attack Vatican City. In 2010, a citizen of Pakistan arrived in Italy with the alleged objective of carrying out a suicide bombing for the Islamic extremist group. Immediately Italy’s anti-terrorism police branch was able to recognize the suspect, but a terrorist cell was able to somehow get the suspect out of the country before police could get a hold of him.

During that time, Vatican City did have knowledge of the alleged terrorist plot to attack, but was unaware of just how high the risks actually were because they were not cognizate of the alleged suicide bomber who became an imminent threat when he landed in Italy. The attack, having been compromised, was unable to be carried out by this Islamic extremist group, leaving them no choice but to postpone their strike.

The location where the group had set up base was on Sardinia, an island in the Mediterranean Sea, which is where attacks against U.S. forces grounded in Afghanistan and the Pakistani government were strategically being planned. The exact location of the base site, which was organized by a Pakistani, was in the city of Olbia, at a Sardinian coastal resort. The city is filled with different resorts, since it happens to be a hot spot for tourists to go visit. This vast operation was covering seven provinces in Italy, but most of the eighteen arrests were made on this island.

Among those arrested were terrorist attackers that were responsible for an attack that took place in the city of Peshawar in 2009, killing more than 100 people, as well as other attacks that were made in Pakistan. The man who is alleged to have orchestrated the entire Vatican City attack was one of the eighteen seized by police, who happens to be an imam, which is a Muslim spiritual leader.

This man has apparently procured money from unassuming Pakistanis and Afghanis under the impression their money was being used for religious purposes. In reality, their cash was being used to fund terrorist attacks in Afghanistan and Pakistan. To keep from dealing with Italy’s regulations on currency control, the money was sent to the Pakistani members of the group through hawala, which is an informal system of money transferring. Basically, they were using a system that enabled them to transfer money without the money actually being moved.

Members of the group were big supporters of the Armed Struggle Against The West. Prior to their planned attack on Vatican City, they had arranged to return back to Afghanistan and Pakistan to execute a few more terrorist attacks and then make their return to Italy to follow through with their fatal intentions. As supporters of the Armed Struggle Against The West, their goals were to prompt a rebellion against the government of Pakistan in order to put an end to its operations against the Taliban as well as its support of U.S. Forces grounded in Afghanistan.

These group members have been smuggling Pakistani and Afghani migrants into Europe, giving them forged paperwork and labeling them as victims of ethnic or religious prosecution seeking out asylum. Others were given counterfeit work contracts. To try and decrease the extent of high risk attacks on Vatican City, the foreign office in Pakistan stated that their embassy located in Rome has been with working with the government of Italy to gather all the information on the arrested alleged terrorists.