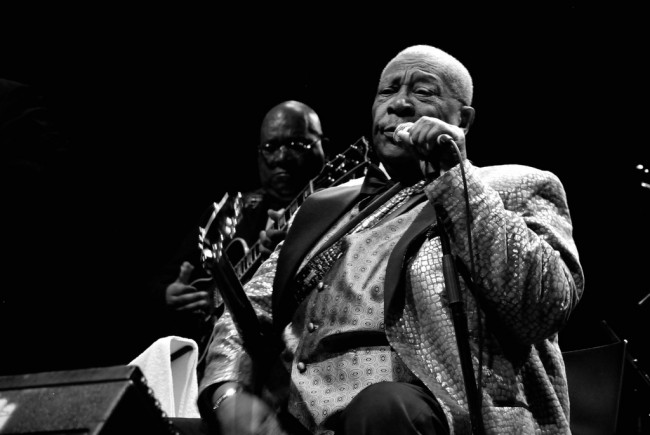 He also allegedly prevents King from receiving medical assistance and timely medications. The daughters are concerned of abuse, stating that Toney has a full power of attorney over the ill blues singer and is also preventing him from seeing his family. The legend’s family and friends are concerned that King’s manager is keeping him a hostage in own home.

King’s daughters have a long list of concerns over their ailing father’s health, as well as his financial well-being. The blues legend has diabetes and requires medical care and medication, and Toney is allegedly preventing him from receiving both. They also suspect that he has been stealing tens of millions of dollars from their father’s bank account, stating that in the last year $453 hundred thousand was withdrawn from King’s bank account, leaving him with of $5 million balance.

Their concern is not only that Toney is keeping King away from his family and friends, but that he is also trying to take over his estate. Toney is also allegedly not allowing the singer to see his own family. The daughters also shared their concern suspecting Toney is abusing King. The musician was seen by his doctor and even though he confirmed no mistreatment of their father has taken place, his family and friends are equally concerned for his well-being.

Disturbing accusations also account for Toney hiring a caretaker who got drunk and passed out, while the singer collapsed and injured his face. There have been other incidents that required hospitalization and the police to report to the musician’s house. The police will not provide any details to show any proof that Toney has done anything wrong and no evidence has proven any mistreatment or abuse of the songwriter.

Last week the ill singer suffered a heart attack and his family wanted to take him to the hospital, but Toney allegedly would not allow them take him. He is claiming the guitarist is dying but will not allow his family to spend any time with him. The legend’s family is suspicious, claiming there are missing funds and their father is being held in hostage isolation from his friends and family.

The songwriter is a legend in his own right, and is recognized for being the best bluesmen and one of the top guitarists of all time. He is s singer, songwriter, and guitarist. In 2011, the musician ranked number six of the top 100 guitarists of all time and was ranked number 17 on Gibson’s top 50 Guitarists of all time. The blues legend was inducted into the Rock and Roll Hall of Fame in 1987, and into the R&B Hall of Fame in 2014. This man is considered the most influential blues musicians of all time, therefore earning the name “The King of Blues.” It is unfortunate that his family and friends have to watch him from afar in what could be his last dying days. This legend is most known for developing the most identifiable guitar styles of all time. He had given 250-300 concerts per year until his seventies. He was a hard worker, and it seemed that music came easily to him.

The musician has by far earned his nickname and his recognition, as he has achieved quite a bit in his music career. It would be unfortunate to see him being held captive and away from the people who love him. Although it seems like he is being kept a hostage in his own home, he deserves the right to say a final farewell to his friends and family.